Adidas has based the design of FC Bayern Munich's 2020/2021 football kit on the facade of its home stadium, the Herzog & de Meuron-designed Allianz Arena.

FC Bayern Munich plays at the Allianz Arena in Munich, which was designed by Swiss architecture studio Herzog & de Meuron and completed in 2005.

Its facade is clad in ETFE panels that are arranged in a diamond pattern and illuminated in red when the team plays at home. This shape was incorporated into the shirt design.

"It's a very important symbol for the club which is famous all over Germany and Europe," said Bianca Mast, senior product manager of football apparel at Adidas.

"The silhouette of the stadium features a diamond pattern which is a well known visual link to the club," she told Dezeen.

Utilising the diamond pattern continues the club's connection with the motif, which is also incorporated in the club's crest and the flag of the state of Bavaria – where the club is based. 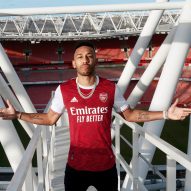 "The diamond pattern of the stadium is very well known and it is already often used as a visual reference for the club," explained Mast.

"The diamonds are not only part of the Bavarian flag but also the club's crest. It is a visual reference which has already been used several times in designs for the club."

FC Bayern Munich will play against Barcelona on 14 August as part of the culmination of this year's tournament.

Earlier this year, London club Arsenal revealed the chevron-covered home shirt of its 2020/2021 kit, which was informed by the club's art deco history. Rival English club Chelsea also unveiled a herringbone-pattern shirt informed by the suit-makers of Savile Row for its 2020/21 home kit.