Experimental clothing brand Vollebak has created a hoodie from eucalyptus trees dyed with pomegranate, which will break down in a compost heap within eight weeks.

Made from pulped eucalyptus and beech wood that has been sourced from sustainably managed forests, the plant-based jumper achieves its a mossy hue from being dyed with pomegranate peel.

It is designed to be fully biodegradable and compostable.

"So when the hoodie has reached the end of its life – whether that's in three years' time or 30 – it can be put out with the compost or buried in the garden."

The hoodie will decompose at different rates depending on how it is composted, with warmer, bacteria-filled environments breaking down the material quicker.

Vollebak calculates that it will completely break down within 12 weeks if buried in soil, or eight weeks in a home compost heap, and even faster in an industrial composting facility.

To create the hoodie, Vollebak looked back 50 centuries to the earliest humans, who wore biodegradable clothes.

"If we look back at Otzi man – one of our ancestors who was found preserved in ice for over 5,000 years – his clothes were made of plants, tree bark, grass, and animal skins," said Tidball.

"So humanity has already achieved the pinnacle of biodegradable clothing. The question is, what's the modern version of that?"

"And it's setting ourselves that brief that's the hard bit," he continued. "Because you're trying to recreate the materials and energy consumption of ancient, localised production methods using a modern global supply chain."

According to Tidball, making biodegradable clothing was not a challenge – what was difficult was creating something that would easily compost and could be manufactured in a sustainable way.

"Making something that biodegrades isn't the hard bit," he explained. "On a long enough timescale, everything on Earth will biodegrade."

"What's hard is making something that biodegrades very quickly, leaves no trace of its existence, and uses as little energy to create in the first place as possible," he continued.

Vollebak made the hoodie from eucalyptus and beech using a closed-loop production process, where over 99 per cent of the water and solvent used to turn the pulp into fibre was recycled and reused.

"On the Higg MSI scoring system, which measures the impact of producing a kilogram of fibre – taking into account fossil resource depletion, water scarcity, eutrophication and global warming – this fabric scores 10 against cotton's score of 60," explained Tidball.

It was dyed using the peel of a pomegranate fruit, which is normally thrown away, and stitched with recycled cotton thread.

The hoodie follows Vollebak's wood pulp and algae T-shirt, which also breaks down in the soil in three months.

"If biodegradable clothing was achieved over 5,000 years ago, then for the last few centuries we've been heading in the wrong direction," said Tidball.

"We need to get back to the point where you could throw your clothes away in a forest and nature would take care of the rest," he continued.

"Or we need to progress to a point where all your clothing lasts as long as you do. So we're attacking both angles at the same time. Once you've reached equilibrium again, you can start looking at what advances material science can make." 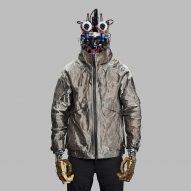 Vollebak, which Steve Tidball established in 2015 with his twin brother Nick, previously created a near-indestructible jacket from Dyneema – a fibre that is 15 times stronger than steel.

The company has also weaved seven miles of copper into virus-killing Full Metal Jacket and made a coat from graphene that acts as a radiator.