A squishy chair made from bio-foam that looks like stone, a modular seating system inspired by a church and vases cast from beeswax were among the objects on display at the Ukurant Objects exhibition at the 3 Days of Design festival in Copenhagen.

"'Ukurant' means something that doesn't look like everything else in Danish," said Laerke Ryom, one of the co-founders of the Ukurant project.

"So what you see here is our interpretation of something out of the ordinary, something that is 'ukurant'."

"Many of the objects are balancing the functional versus the non-functional," she added.

Together with Josefine Krabbe Munck, Kamma Rosa Schytte and Kasper Kyster, Ryom founded Ukurant as a professional community for graduates to share ideas and help each other.

Their Ukurant Objects exhibition showcased 20 designs from 24 designers spread across the world, all with a connection to Denmark.

"The pieces represent 24 young designers who are all just starting their career," Ryom said. "We selected these pieces because we wanted to show design that challenges and plays with function and materials."

Among the designs shown was Bonnie Hvillum's Foame, an organic-looking chair that resembles a glossy black stone from a distance, but was actually made from a biodegradable foam-composite of charcoal developed by the designer that renders it tactile and squishy.

"It comes from the idea that churches are becoming more of a social space than a house of God," he told Dezeen.

"Churches of that time had furniture that was very directional to the altar, but they don't function well for this new kind of church for the social space." 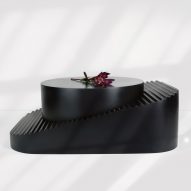 "So this is my idea of a modular seating system that can go into the church and speak to many different kinds of functions," he added.

Others, such as Alexander Kirkeby's mouth-blown glass housewares and Bjarke Ballisager's Together and Apart multipurpose furniture system, combine function with innovative design.

Ballisager's design can function as a side table, children's chair, a bar stool and more.

"I wanted to create furniture that didn’t have a single, predetermined use," the designer said.

"Furniture that would invite and challenge the user to interact with it, feel the material, experiment with different heights and widths, try different combinations, and essentially play with it, as we need more creative play in our lives."

Many of the designers also played with materials. Ida Elke's Blind Cast Instant Wax vases were cast from a composite of beeswax and minerals in a mold of wet clay.

"The cavity is excavated in a quick process, partly in the blind, and by feeling ahead with the hands," the designer said. "The vases are characterised by the hand groping and the responsiveness of the clay more than the intention of form."

Sia Hurtigkarl Degel and Pia Angela Rasmussen's Fellah wicker stools are more traditional and could function as both a stool and a storage box.

When stacked on top of each other, the baskets form a shape that evokes the silhouette of fellahs, farmers of ancient Egypt who carried large earthenware containers on their heads.

This was its inaugural event, and the Ukurant Objects exhibition will now be an annual design show to draw attention to emerging designers during 3 Days of Design, something the organisers think is currently missing.

"It was very important to us to have an exhibition like this during 3 Days of Design, which is a very commercial event," Ryom told Dezeen. "I believe that if Denmark will continue being a design nation we have to also show new perspectives on Danish design." "When you see Milan, Holland or other design weeks, there will always be a place representing young experimental furniture, so we thought it was about time Denmark showed something as well," she added.

Other projects on display at this year's 3 Days of Design included stools made from leftover grain from beer production and furniture made from textiles.

Ukurant Objects is on show until 18 September.

Photography is by Peter William Vinther.