Exhibitors at last week's 3 Days of Design in Copenhagen, which was the first major European fair to take place since the coronavirus pandemic struck, have expressed cautious optimism about the future of design events.

This year's 3 Days of Design was smaller than previous years but exhibiting brands reported a jubilant mood among visitors.

"It's been very celebratory"

"I think many people have been yearning to come," said Christian Andresen, head of design at Danish furniture brand Fritz Hansen.

"Everyone has been craving to go out," added Marie Schmidt, chief marketing offer at Danish furniture and lighting brand Gubi.

"Honestly, we didn't think [3 Days of Design] was going to happen," she added. "But I have to say that it's been quite a good atmosphere and it's been very celebratory."

Byrdal Terenziani said she decided to proceed with the fair after much deliberation.

"We don't know when corona will end, so what should we do?" she said. "Wait years and years and not do anything, or should we say 'okay, we'll cancel all the big parties and take our responsibility?'"

Launched in 2013, the annual 3 Days of Design festival is held in showrooms around Copenhagen and normally features larger events including parties and installations.

The 2020 edition, held in the Danish capital from 3 to 5 September, was shifted from its usual slot in May due to the pandemic. It featured 167 brands, which is slightly fewer than in previous years.

3 Days of Design worked closely with Danish health authorities to ensure the festival was safe for visitors. Hand sanitisers and single-use face masks were handed out at the doors of many of the showrooms.

Some exhibitors, including furniture brand Takt, held outdoor events while others such as Gubi and Danish design brand Hay exhibited in large warehouses with restricted visitor numbers.

"We would like to invite everybody in but the reality is that you have a maximum of a hundred people," explained Gubi's Schmidt. 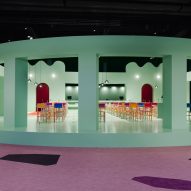 Exhibitors noted a higher percentage of professional visitors and fewer members of the general public.

"We have seen more journalists than normal and more architects than normal," said Fritz Hansen's Andresen. "I think there are fewer people coming in from the street and more professionals."

The brand usually shows in Salone del Mobile in Milan every two years, but the designer said it now feels more at home at smaller, local fairs such as Stockholm Furniture & Light Fair and 3 Days of Design.

"It has become a circus down there and it [Salone del Mobile] has become quite intense," said Andresen. "Prices have gone through the roof."

"We also see that partners and architects who go to Milan have less and less time with us because of the size of the fair," he continued.

"And that means that our return on investment is really low; we consider Milan more of a brand exercise than a furniture-selling exercise."

Hay was one of many Danish brands at 3 Days of Design that had planned to show in Milan this year. Instead, it hosted an exhibition in the Copenhagen Contemporary art building in the city's hip Refshaløen area and held digital one-on-one presentations about the collection with buyers and press.

"We were thinking of filming it and sending it out to everyone, but I thought 'no, I want to have that connection that we normally have in Milan'," Hay co-founder Mette Hay explained.

Hay's space was designed to be a digital showroom and will continue to stay open after the festival, with the founders hosting virtual meetings in the space.

Hay co-founder Rolf Hay added: "There's no doubt that we would have preferred to be together in physical meetings, but that's obviously not possible."

Though brands said they've noticed a thirst for physical events, many had also seen sales do well during the peak of the pandemic.

"But I'm not naive, I think this will have an effect on us, especially the contract market will be suffering because many companies are struggling," he continued.

Changes in marketing strategies have also contributed to sales, with some companies planning to focus more on social media advertising and other digital initiatives after successfully introducing them during lockdown.

"We've had a big success in that field – we haven't analysed it yet, but I think it's had an influence on our sales figures."

Designers stressed that there will always be a need and demand for physical events, but that these might look different in the future.

"Covid has created an unforeseen stop but also a necessary psychological break, where we are talking about how the world is going to be," he said.

Physical events also create new connections, something that is more difficult to do online – especially for emerging brands.

"I don't know if corona will make it harder for upcoming brands," said Rolf Hay. 'It depends on the market approach they have."

3 Days of Design was one of many global events to be cancelled or postponed as a result of the coronavirus pandemic. The Dezeen Events Guide has the latest information about events that are going ahead.