Technology manufacturer Apple has revealed its spherical Apple Marina Bay Sands store in Singapore designed by architecture studio Foster + Partners, which it describes as its "most ambitious retail project".

The transparent glass sphere designed by Foster + Partners has been revealed ahead of the store's opening tomorrow. Instagram users had previously posted images of the globe-shaped store wrapped in a grey covering.

Accessed via a 45-metre-long underwater tunnel from the nearby shopping complex, the store is surrounded on all sides by the bay – creating the impression that it is floating.

"Apple's most ambitious retail project sits on the waters of Marina Bay," said the technology company.

"Appearing as a sphere floating on the iridescent Marina Bay, the store introduces a new and captivating retail experience at one of the most iconic locations in Singapore."

The store's main space is an open-plan area within the 30-metre-diameter, self-supporting glass and steel dome. The structure is made from 114 pieces of glass with 10 narrow, steel vertical mullions for structural support.

Customers within the store will have 360-degree views across the Marina Bay to the surrounding city. 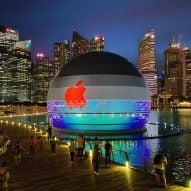 "Apple Marina Bay Sands is all about the delicate interplay between transparency and shade," said David Summerfield, head of studio at Foster + Partners.

"The structure dissolves the boundary between the inside and outside, creating a minimal platform that floats gently in the water, looking out over the bay and the spectacular Singapore skyline."

Within the glass dome, a series of concentric light sunshade rings have been built to provide shading within the structure. These rings rise to the top of the dome where an oculus has been created that is "reminiscent of the famous Pantheon in Rome".

A ring of ten trees has been placed around the edges of the shop's main floor to provide additional shading. These trees are within leather-topped planters that can also be used as additional seating.

The structure is connected to The Shoppes at Marina Bay Sands by a 7.6-metre-wide underwater tunnel, which is flanked with product display cases and has an Apple genius bar running down its centre.

Apple Marina Bay Sands replaced a previous building on the site, which was designed by Moshe Safdie as part of the original Marina Bay Sands complex. One of two "crystal pavilions", the geometric, glass-covered building was previously home to the Avalon nightclub.

The shop will be the third Apple Store to open in Singapore following a tree-filled store in the city's downtown area and a shop within the Jewel Changi Airport.

The latest shop is one of numerous Apple Stores designed by the architecture studio for the technology company including  a shop topped with a wavy white concrete roof in Miami and a store built around a tree-like column in Bangkok.