Japanese architect Takenosuke Sakakura has created three unisex toilets that glow like a lantern at night in Tokyo's Nishihara Itchome Park as part of the Tokyo Toilet project.

Named Andon, which translates as the lantern, Sakakura's contribution to the Tokyo Toilet project will be illuminated at night to make the park a more inviting space.

"By constructing a facility that is bright and open in the limited space of the site, we hope to improve the image of not only the restroom but the entire park," said Sakakura.

"We hope that the restroom will illuminate the park like an andon, or lantern, creating an inviting public space for the visitors."

The toilet is the latest public restroom in the city's downtown Shibuya district built as part of the Nippon Foundation's Tokyo Toilet project, which has seen toilets created by architects including Tadao Ando, Fumihiko Maki and Shigeru Ban.

Sakakura's building contains three unisex cubicles, one of which is accessible, within a regular rectangular box.

Each of the cubicles is wrapped in green-tinted frosted glass and accessed through a green door that has a small porch above it.

The glass has been imprinted with a pattern of trees, which can be seen when close to the toilet block and when inside the cubicles.

Sakakura hopes that the bright toilet will encourage more people to use both the park and the facilities. 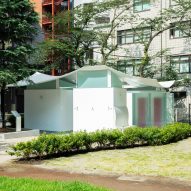 "The former restroom were uninviting and rarely used," he explained.

"We thought it was important to create a facility that not only fulfils the basic requirements of a public restroom, such as having enough toilets to ensure a reasonable wait time but offers a unique appeal that encourages more people to use the facility."

This toilet is the seventh instalment of the Nippon Foundation's Tokyo Toilet project to be revealed, with nine More structures planned for construction in 2021.

Similarly to Sakakura's toilet Shigeru Ban, who was one of three Pritzer Prize-winners to design a toilet as part of the project, also created a pair of transparent blocks that are illuminated at night. Fellow Pritzker Prize-winner Tadao Ando created a circular toilet while Fumihiko Maki topped his toilet block with a "cheerful roof".

Photography is by Satoshi Nagare, courtesy of The Nippon Foundation.