A concrete pineapple and a pair of colourful cartoon eyes are among the playful benches that young architects and designers have installed for the London Festival of Architecture.

This year's winning cohort was by emerging creatives and design studios hailing from Denmark, Belgium, Italy and the UK.

"City Benches is a fantastic programme, giving opportunities for fresh design talent to respond to the streetscape of the City of London," said Tamsie Thomson, director of the LFA.

"This year, creating new seating in the context of Covid-19 restrictions was an additional challenge, and one that this year's cohort have risen to brilliantly with benches that can brighten any day while allowing more socially distanced outdoor space."

The City Benches competition is organised annually with the Cheapside Business Alliance and City of London Corporation.

A Pineapple for London is a faceted bench that doubles as a planter, designed by Hugh Diamond, Archie Cantwell and Cameron Clarke. It was handmade by the trio at RARA Workshop by combining chunky pieces of pigmented concrete.

Its design is a reference to architect Christopher Wren's initial plans to crown the adjacent St. Paul's Cathedral with an 18-metre-tall model of the fruit. 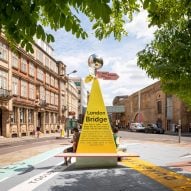 In the Cheapside Sunken Garden, Bartlett graduate Oli Colman has nestled two seats that take the form colourful eyeballs that look up to the sky.

Aptly named Look Up, it is designed to provide "space for someone to sit and contemplate both the world around them and the marvels of the City skyline above".

The Chim Chim bench pays homage to London's Victorian-era houses, with a backrest made from four traditional residential chimney pots.

Its base, which is constructed from bricks, is unified with the chimneys by a bright-red finish that architecture studio Profferlo chose to set the bench apart from its surroundings.

Nearby is The Two-Seater Rule bench, which takes the form of two throne-like chairs linked by a two-metre-long bench.

It was created by Iain Jamieson with Dave Drury to encourage people to engage in face to face discussions while keeping a safe space between them – adhering to the UK government's Covid-19 safety guidelines.

The final bench was made by Studio Mxmxm from laser-cut powder-coated steel plates, which each represent an axis in the geographic coordinate system.

LFA is the world's largest annual architecture festival. It usually runs throughout the course of June, however, this year it was forced to follow a digital format in light of the pandemic.

Many of its physical initiatives, like City Benches, will take place throughout the autumn. This includes its wayfinding competition, which Charles Holland Architects won with a pyramidal post called The Tooley Street Triangle that is topped by a mirrorball.

Photography is by Luke O'Donovan.