Rever & Drage has created a triangular, aluminium toilet near the Farstadsanden beach on the west coast of Norway on one of the country's national scenic tourist routes.

The toilet, along with spaces for 150 cars and a fence that restricts access to neighbouring fields, was built on one of the Norwegian Scenic Routes to serve the local beach.

"The core concept for this project is threefold; first and foremost it is about facilitating a large parking area in a vulnerable agricultural landscape, that also functions well when not in use," explained Rever & Drage architect Tom Auger.

"Secondly it is about creating a boundary structure that guides visitors towards the beach area, without being an alien element, either to the surroundings or to visitors," he told Dezeen.

"Thirdly it was about placing the toilet building in a withdrawn position by the treeline, which is the traditional way of placing such structures close to the roadside."

Made in a local shipyard from aluminium, before being floated on a barge to the site, the Farstadsanden beach toilet block is an equilateral triangle in plan.

It contains an accessible toilet in a double-height space that has a large window, as well as a regular toilet and a room for storage that gives access to the first-floor equipment room. There is also an outdoor shower.

"The toilet is triangular to solve the required plan in the most efficient way, with one accessible toilet and one being standard," said Auger.

"It is also a strong construction form that will withstand winds by interlocking the three outer walls at 60-degree angles."

As the car park is only used by around 10 car on regular days, but can be full on peak days, Rever & Drage  aimed to lessen the visual impact on the area as much as possible.

To do this, grass paving was used for the parking spaces instead of asphalt and the toilet was built back from the beach. 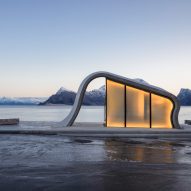 "The grass paving allows the parking area to blend with the surrounding fields and provides a gradual transition to the fields with the same grass growing on both sides of the fence," said Auger.

"Also by placing the storage and technical room on the second floor, the footprint for the toilet building is reduced, thereby minimising the need for excavation and concrete foundations."

Along with being a logical structural form, the toilet's triangular shape is a reference to maritime navigation signs and acts as a pointer, showing visitors the way to the beach.

"The toilet is placed in a relatively withdrawn position and will be even more so when the trees grow, but at the same time it does have a relation in its scale, and its sign-like facade, to navigational sea marks," said Auger.

"In this way, it guides visitors towards the beach – 'take right here'. As such, it is an ambiguous structure in being both a guiding sign, but withdrawn at the same time."

The Farstadsanden beach toilet is the latest rest stop to be built on Norway's national scenic tourist routes – 18 routes across the country that are known for their breathtaking scenery.

Auger believes this project is more restrained than some of the previous structures built on the route, which include a wave-shaped toilet facility to at a lay-by in the northern region of Gildeskål and a mirrored toilet block near a protected rock formation.

"This project is in the down-to-earth end of the scale when compared to some of the other scenic route projects," he said.

"The grass paving blends in with the fields and the boundary fence could from a distance be taken for a normal horse fence made by your grandfather," he continued.

"The toilet building is relatively tall, but still feels at home in this coastal area, due to its ship-building technique and sea-mark graphics."