He was joined by Solanki, founding director of Ma-tt-er, and Amber Jae Slooten, who is the co-founder of digital fashion house The Fabricant.

"The talk addresses the limitless potential that surrounds textiles – from the ephemeral to the long-lasting," said the festival's curators.

"Topics explored include textiles' inherent intelligence and their technological capacity to readdress our relationship with ownership and consumption."

Solanki is the founding director of Ma-tt-er, a London-based design practice that focuses on the relationships between people, materials, the immaterial and the virtual.

Her work aims to adjust mindsets, behaviours and mechanisms to enable a future that is caring and respectful by developing strategies that are biodiverse, inclusive and responsible.

She is also the author of the book Why Materials Matter, and a tutor at the Royal College of Art in London.

Slooten is based in Amsterdam in the Netherlands. She is the co-founder and creative director of The Fabricant – a fashion house that specialises in developing virtual garments that exist exclusively within the digital realm.

She created her first digital collection in 2016 as part of her final-year project and was the university's first student to graduate with an entirely virtual collection.

Pym is a London-based artist whose work explores themes of damage and repair in textiles.

Her work has been exhibited in galleries around the world including V&A Dundee, the Textile Museum in St Gallen, Switzerland, and Galleri F15 in Norway.

Alongside her art practice, Pym is also a visiting lecturer at the Royal College of Art and University of the Creative Arts, Farnham. 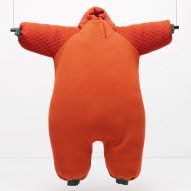 She recently installed a series of brightly coloured, patterned flags above a walkway that cuts through Coal Drops Yard in London.

Called Pattern Portraits, the project involved working with two groups of local students to create a flag series that could be recycled as a clothing collection after the installation's decommission.

This conversation was produced by Dezeen in collaboration with Ma-tt-er for London Craft Week 2020.