Tactile bricks and pinewood partitions decorate the La Nave apartment, which Nomos has slotted into the concrete shell of a disused workshop in Madrid, Spain.

La Nave was developed by Nomos as a family home for two of its partners, Ophélie Herranz and Paul Galindo, who head up its Spanish office.

The project has since been shortlisted for apartment interior of the year at Dezeen Awards 2020.

La Nave was originally used as a large, open-plan printshop arranged around a structural concrete grid measuring 34 metres in length and 10 metres in depth.

Nomos' intervention retains this structure but converts its open layout into a continuous loop of living areas, arranged around enclosed private rooms.

"La Nave is the transformation of an industrial space into a place for life, which takes place as a continuous sequence, with very little difference between work and family leisure," said the studio, which also has offices in Geneva and Lisbon.

"La Nave's plan escapes any typological definition. It results from the search for new spatialities required by existing constraints."

Nomos' initial plan for the apartment was to position the enclosed spaces and wet areas on the rear wall – opposite to the only facade with windows.

However, La Nave's existing plumbing is attached to the central concrete columns, meaning the wet areas had to be placed centrally too.

To achieve this while ensuring natural light could enter the depths of the apartment, Nomos positioned the wet areas and enclosed rooms in line with the central columns, but at a 45-degree angle to the outer walls.

They are divided into two parts and set back from windows, making space either side and in between to ensuring light from the windows can pass through.

"The typological strategy started from the search for the optimal location of the service spaces," Herranz told Dezeen.

"The wet cores had to reach the downspouts, attached to the central pillars, but we wanted to move them towards the back of the space, to offer more light to the living spaces. We rotated them 45 degrees and explored the potential of the diagonal." 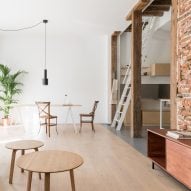 The layout creates a continuous loop of shared living spaces around the perimeter of the apartment, which are used for work, play and dining.

"We never thought of creating a large, open, loft-like space, but rather a sequence of well-defined spaces, which would give rise to multiple situations," Herranz added.

By setting the private living spaces away from the windows, Nomos also made space for a "winter garden" along the window wall.

This area doubles as a thermal buffer – a space that separates living areas from the outside to reduce dependence on artificial heating and cooling.

The predominant material throughout the renovation is glazed brick, finished in white and cobalt blue, teamed with a pinewood framework and MDF panels.

The materials were chosen by Nomos to complement the existing concrete structure while providing the space with a warmer and more homely atmosphere.

"The qualities of traditional materials provide comfort and reinforce the idea of home, of domesticity, in contrast to the surrounding industrial space," said Herranz.

"The glazed bricks provide a note of brightness and colour typical of a more ornamental language."

The bricks were used to build most of the partitions, with their glazed sides lining bathrooms and kitchen and the unglazed faces exposed in the living rooms.

Their glazed and unglazed sides are also alternated in places to create patterns.

The majority of furniture in the space is bespoke, designed by Nomos from pine wood specifically for La Nave.

This includes a low-lying, circular table and coffee table made from pine, and terrazzo detailing made with old flooring that was removed from the workshop.

Other projects that are shortlisted for apartment interior of the year at Dezeen Awards 2020 a sea-facing residence in Jaffa by Pitsou Kedem and a two-storey dwelling by Coffey Architects that is covered in thousands of wooden blocks.

Photography is by Luis Asin.