Located on a sloped site beside Me-Kwa-Mooks Park, the dwelling is a remodel of an existing house with a jumbled layout and poor energy performance that the studio said followed "several ill-conceived additions and modifications".

SHED's overhaul was designed to make the house more sustainable and better reflect the interests of its owners – two former circus performers with a love for Japanese architecture.

To achieve this, it stripped back the dwelling into two interlocking volumes and simplified its interiors to create brighter, open spaces with views outside.

"Both clients have lived in Japan, and enjoy both traditional and contemporary design elements from the concept of the tea room to Studio Ghibli to contemporary Japanese architecture," said the Seattle-based studio.

"Both clients had been professional circus performers, bearing an affinity for open, dynamic spaces," it added.

"A key element of the brief was for the small individual spaces to open, and become interconnected spaces with big views to forest and water."

To modernise the Me-Kwa-Mooks Net-Zero house's stripped-back exterior, SHED clad one of the volumes in wood and the other in standing seam metal panels.

They are unified by a large, wooden veranda, which evokes a Japanese engawa and provides private outdoor space and a viewing platform of the park.

During this process, SHED also "over-insulated" the building's envelope and introduced Passivhaus-certified windows.

Teamed with an array of rooftop photovoltaic panels, the studio claims this puts the dwelling "on track" to operate as a net-zero energy building – giving the house its name. This means that the energy that it uses annually will be equivalent to the renewable energy that it creates. 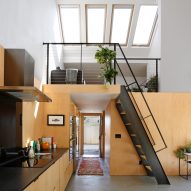 Inside, the centrepiece of the Me-Kwa-Mooks Net-Zero is a large hearth on the middle floor, from which a bright orange flue extends up and out.

This flue is modelled on the mast that supports a pitch of a circus big top. While paying tribute to the clients' history, it also helps to stitch the two volumes together internally.

On the middle floor, three different but interconnected rooms are placed around this hearth to emulate a three-ring circus. This includes a dining room, living area and space for performing music.

The bedrooms are placed on the upper floor, alongside an office that is visually connected to the three rooms below to create the feeling of sitting up inside a big top.

The interiors have deliberately spare finishes, dominated by white-painted plasterboard that emphasises the size and open-plan nature of the rooms.

Highlights include a grey steel stair, an ensuite bedroom with Japanese-style tatami bed and soaking tub, and warm wooden cabinetry and flooring throughout.

As part of the project, SHED also developed a new entrance sequence for the house as its steep site was originally difficult to access.

This includes a circular stair that leads up from the street to a new trail of steps and a covered bench to allow visitors to stop and rest after the sharp incline.

A more accessible driveway with turnaround space has also been incorporated, alongside an open carport that was converted from the old enclosed garage.

Elsewhere, SHED also recently refurbished the early 1950s dwelling in the Pacific Northwest that was built cartoonist Irwin Caplan, and created a pared-back studio space and guesthouse from an old horse stable.

Main image is by Tony Kim. Other photography is by Rafael Soldi unless stated otherwise.