In the second video of our Design for Life collaboration with Dassault Systèmes, Exploration Architecture founder Michael Pawlyn explains how computational design tools allow architects to mimic the natural world.

Pawlyn is the second designer to feature in the Design for Life collaboration between Dezeen and Dassault Systèmes, which highlights designers who are using technology and research to build a better world.

"Biomimicry is innovation inspired by nature," explained Pawlyn in the video, which was filmed by Dezeen at the founder of biomimicry-focussed practice Exploration Architecture's home studio in London.

"At Exploration Architecture, we use biomimicry to rethink all sorts of building types and develop solutions that use resources much more efficiently," he continued.

Exploration Architecture is known for projects that demonstrate the potentials of biomimicry, including a seawater-cooled greenhouse modelled on a beetle that harvests its own fresh water in a desert, and a concept for an office building that mimics the structure of a spookfish's eye to help maximise natural light.

In the exclusive video interview, Pawlyn reveals a number of conceptual projects that demonstrate how Exploration Architecture combines technology and scientific research to imagine structures that can integrate with natural systems and even benefit them.

The Biorock Pavilion is a concept for an amphitheatre-like event space that could be grown underwater.

The form of the building is based on that of a seashell, as well as mathematical forms.

The basis of the pavilion would be a skeletal structure comprised of a network of very thin steel rods, which would be immersed in a solution of minerals.

An electric current would then be run through the steel skeleton, allowing the remainder of the pavilion to be 'grown' as the minerals calcify atop the base structure.

"It takes those minerals out of the seawater and produces a structure similar to reinforced concrete," stated Pawlyn. "This uses an absolute minimum of material to grow a whole building." 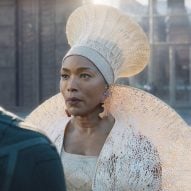 Many of Exploration Architecture's projects draw on examples found in nature, looking at organisms that have developed precise structures that use material sparingly through millions of years of evolution.

"In biology, you often find very complex structures that achieve amazing resource efficiency by putting the material exactly where it needs to be," said Pawlyn.

"With computational design and 3D-printing, it's getting much easier to mimic that level of complexity and efficiency."

An example offered by Pawlyn is a collection of 3D-printed display tables he designed for an exhibition of Exploration Architecture's work at London's Architecture Foundation in 2014.

"We used algorithms to work out what the most efficient place for the materials would be based on bone and tree growth patterns" explained Pawlyn. "What we ended up with was something that used 1,000th of the material of a solid object of that volume."

Exploration Architecture is currently planning a pavilion based on the layered microstructure of a bird's skull.

"Bird skulls are a great example of a complex and very efficient structure" explained Pawlyn. "We used computational design to produce a version of this."

"We created a 3D-printed model, which is an enlarged version of a bed skull, which ultimately we want to turn into a pavilion structure. We were able to model this in a way that was quite similar to the way it actually grows in biology," he continued.

"What you have is these domes of incredibly thin, bony material, connected together with struts and ties. It's incredibly lightweight, and very structurally efficient."

The Abalone House is a conceptual home, based on the form of an abalone shell, through which Exploration Architecture sought to explore how a building could be used to extract harmful carbon from the earth's atmosphere.

"We're using tiles made out of atmospheric carbon," stated Pawlyn. "And that's what we need to do more of, we need to find ways to make buildings by taking carbon out of the atmosphere."

According to Pawlyn, architecture that aims only to be sustainable is not ambitious enough to combat the global climate emergency, as it is based around mitigating negative impacts rather than creating positive impacts.

Speaking to Dezeen in a previous interview Pawlyn, who is one of the founders of Architects' Declare, said, "we fooled ourselves that sustainability was getting us where we needed to go".

The talk was followed by a video profiling Austrian designer Julia Koerner, in which she explains how she uses technology to apply architectural techniques to fashion and costume design.

In the coming weeks, we will publishing a series of videos profiling the work of cutting-edge architects and designers including DS Automobiles design director Thierry Metroz and Studio INI founder Nassia Inglessis.