US firm Trahan Architects has renovated the Coca-Cola Stage at the Alliance Theater in Atlanta, Georgia, using steam-bent timber to form an undulating auditorium.

Constructed in 1968, the 650-seat Alliance Theater is part of the Woodruff Arts Center campus in the state capital of Georgia.

For the renovation, Trahan Architects stripped the interiors of the lobby, theatre and backstage areas back to the original concrete walls.

New York-based, steam-bent furniture designer Matthias Pliessnig collaborated on the design of the wooden elements, which were made by fabrication specialists CW Keller Associates.

Pliessnig created a 1:1 scale mock-up of the Coca-Cola Stage at the Alliance Theater and shared his expertise in steam bending wood, a process that involves heating wood to make it pliable and bending it by hand. 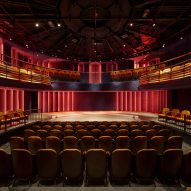 Revolving auditorium is showpiece of Boulevard theatre by SODA

"The result is a series of beautiful steam-bent millwork guardrails and balconies that merge handcraft with mass production," said Trahan Architects.

"The synthesis of acoustic performance, hand-driven artistry, and sophisticated laser positioning are all carefully choreographed to execute the complex steam-bent millwork without the need for wasteful CNC moulds."

The seating is now 10 feet (three metres) closer to the stage than before, and the seating of the stalls abuts the orchestra pit.

Seating stacked around and above the stalls in the balconies are defined by curving wooden elements but are not separated.

The architects said this design decision was a symbolic one to draw on Atlanta's history. The city was America's most racially segregated after 1865 when slaved were freed in the US, right up until the 1960s.

During this period, black people were barred from eating at certain restaurants or attending certain cinemas reserved for white patrons or were forced to sit in separate seating.

"The design team felt a responsibility to remove the separation between balcony and orchestra – challenging historic notions of segregation and discrimination," said Trahan Architects.

"All seating zones can be accessed from every entrance within the chamber."

Based in New Orleans and New York, Trahan Architects was founded in 1992 by Trey Trahan. Previous work by the practice includes a visitor centre for an 18th-century plantation in Louisiana.

The Coca-Cola Stage at the Alliance Theater is shortlisted for Dezeen Awards 2020 in the civic and cultural interior category, along with a museum in Pittsburgh built in a ligtening-struck library and a museum of architecture models in China.

Photography is by Leonid Furmansky unless otherwise stated.