Beam is nestled amongst a parade of shops in the affluent Notting Hill neighbourhood and serves up a menu of Mediterranean-inspired brunch dishes.

Locally-based Ola Jachymiak Studio was brought on board to design the cafe, tasked with creating an inviting interior that would be able to comfortably accommodate just over 90 customers.

There was just one key issue – the cafe unit had an awkwardly long and narrow plan that allowed in very little sunlight. The studio therefore decided to utilise a colour and material palette that would foster a sense of brightness and warmth.

At the front of Beam is a casual seating area dressed with egg yolk-yellow armchairs and a couple of tropical potted plants.

The black gridded windows that previously featured on the cafe's facade have also been swapped for expansive panels of glazing. During the warmer summer months, these can be pushed back to let in more light and fresh air.

Just beyond lies a more formal dining area. The wall on the right-hand side has been painted white and punctuated with arched niches that display amber-hued glass ornaments.

On the left-hand side is an exposed brick wall. Along its lower half runs a curvaceous seating banquette upholstered in burnt-orange velvet.

Tangerine-coloured paint has been applied to the walls in the middle section of the cafe, where the coffee and pastry bar is located.

Customers who are getting their orders to-go can flick through the books and magazines displayed here on wall-mounted shelving units.

The base of the bar is lined with strips of oak, while the countertop is crafted from white Calacatta marble. Hanging directly overhead is a Bubble lamp by American designer George Nelson. 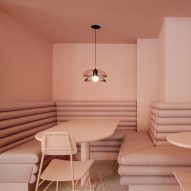 This section of the cafe also features flooring clad with terracotta tiles. The same tiles appear again in the bathrooms, covering the toilet cubicles and the arched panels that the sinks back onto.

Additional dining tables and bistro-style chairs with orange seat cushions have been placed at the rear of Beam, which was once the darkest area of the cafe.

To counter this, Ola Jachymiak Studio has created a light installation across the ceiling. It comprises several spherical pendant lamps from Danish brand New Works that have been suspended at different heights.

Sheer white curtains have also been draped around the room's periphery.

Others include Cha Cha's, a Latin-fusion restaurant that's set within the three-floor HQ of fashion label Sister Jane.

Photography is by Simon Carruthers.