Architecture platform RSAA designed Urbania, an immersive exhibition about city planning, for the Prague Institute of Planning and Development in the Czech Republic.

The installation at Prague's Centre for Architecture and Metropolitan Planning (CAMP) has been shortlisted for Dezeen Awards 2020 in the exhibition design category.

Trained guides took visitors on a guided tour of the exhibition, which featured light, sound and interactive installations.

Visitors were invited to pedal a bicycle, call their grandmother from a phone booth, sit on benches and walk around a stylised scale model of a factory filled with objects framed by cutouts.

Prague Institute of Planning and Development (IPR Praha) set up Urbania to teach residents of the Czech Republic's capital about urban planning and change negative perceptions of civil servants.

As well as educating guests, the guides also debriefed them and gathered their responses to feedback to IPR Praha to help the institution with research.

"Urbania is part an audio-visual experience, part a platform for debate, which using an immersive setting demonstrates some of the typical situations that come up in city development," said IPR Praha. 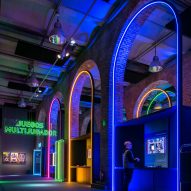 "Urbania is accompanied by a photo installation throughout the city, which prominently displays photos of civil servants and their actual quotes, which aim to challenge the often negative perception of public sector employees," the organisers added.

"The intent is to humanise their challenges while also showing the positive impact they can have and the necessity of the role of the civil servant."

Technology experts 3dsense designed a light and sound show to create a different backdrop for each section and an overall engaging experience.

A 60-minute-long soundscape featuring a story narrated by the fictional character of Urbania played over the timed visitor experience.

Urbania was originally scheduled to run from January to February 2020, but was extended to March due to the popularity of the exhibition.

RSAA was founded in 2009 by Bronislav Stratil and Jan Roháč and is based in Prague.

Other exhibitions shortlisted for Dezeen Awards 2020 include an exhibition on the history of video games in Madrid and an interactive installation about ASMR in Stockholm.

Urbania took place from 16 January to 13 March 2020 at IPR Praha's Centre for Architecture and Metropolitan Planning. See Dezeen Events Guide for an up-to-date list of architecture and design events taking place around the world.