Milanese design studio Older has created a series of objects including marble wall-hangings shaped to look like breasts with pierced nipples, and an inflatable chair named after a Blade Runner character.

Called Wide Eye, the collection includes a set of cutlery, carafes, wall-hung ornaments, chairs, a table, a sofa, lamps and a basket for bread.

Older said each piece shows "a playful devotion to contemporary design" with features that the creators hope will spark conversations.

The objects, created in collaboration with Danish artist Alexander Vinther, were featured in an exhibition also titled Wide Eye during the city-wide Milano Design City festival in September. The show was curated by Studio Vedèt.

Each piece in the collection was produced by local artisans in Milan.

"Basically, we've taken the design process back to the 1960s and 70s, to the idea of anti-mass-production," said the studio, which is headed by Morten Thuesen and Letizia Caramia.

"We were inspired by this era when great design unfolded in dialogue with artisans, and objects and furniture were shaped and almost thought by the human hand. We wanted to bring that authenticity back to contemporary design."

For the Aisatsana cutlery, Older and Vinther took inspiration from sci-fi movie Blade Runner – in particular, the fictional flying cars called Spinners from the film.

Also informed by Blade Runner is the Zhora chair, which takes its name from one of the film's characters. The chair features a frame made from bent stainless steel, topped with an inflatable cover made from PVC that can be blown up to offer a more cushioned seat.

"The chair has an avant-garde expression, and – like the movie it references – pushes our expectations of what 'common' actually means: in this case, a chair," said the studio.

Marble was also a favoured material for the Wide Eye collection, which the designers used to make a series of carafes and wall-hangings.

The sculptural vessels, which feature a beak-like spout, a cylindrical body and a curved handle, have been cut from blocks of white Carrara marble, Lebanese red marble and green onyx marble.

According to the designers, the veined surface of each type of stone used for the carafes has an almost human, flesh-like appearance.

This flesh-like quality also complemented a series of white and green marble wall-hangings called Perky, which take the form of breasts with hooped nipple piercings.

"Perky points to the intimate rite of passage of a person's first sexual encounter, the idea of the first touch of a woman's breast," said the studio.

"Perky is the loss of innocence and the awakening of sexual consciousness, suggested by the piercing of the breast – a poetic reference with an iconic shape."

As Older and Vinther explain, the marble's green hue was chosen to recall beaches on the west coast of Denmark, which are dotted with green glass that has been made soft by the waves.

Also included in the collection and exhibition is the Papi table, comprising a looping red-iron frame with a Plexiglas top, which takes its name from the popular Spanish term for 'endearment' and is informed by 1980's postmodernism.

The Wide Eye Wake Up sofa is made from khaki-coloured nylon and consists of three individual chairs held together as one, singular sofa by elastic bands. This system can be adapted to create separate chairs or varied combinations of the three.

The Baguette bread basket is made from white and grey marble and has a soft form inspired by sofas.

The Gunnol lamps are also crafted from white marble and have a triangular form that takes cues from a 1950s pyramid-shaped building by Danish artist and architect Gunnar Aagaard Andersen.

The Milano Design City event was organised by Fuorisalone and Design City Edition after the coronavirus pandemic led to the cancellation of this year's Salone del Mobile. 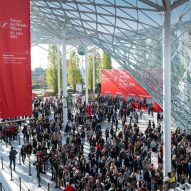 Salone del Mobile cancelled until 2021 due to coronavirus

The design festival saw local events, talks, workshops and exhibitions held across the city, hosted in showrooms, museums, art galleries and venues set up specially for the occasion.

An online showroom was also set up through Fuorisalone.it to enable "virtual visits" to the design showrooms. The aim of the two-week-long event was to reinvigorate the Italian design system, which is now open again to the public.

Photography is by Delfino Sisto Legnani.