Architecture firm OMA is building a seven-mile-long, underwater sculpture park, which it says will bolster the shoreline of Miami Beach against the effects of climate change and include installations that can only be viewed while snorkeling.

Initiated by Argentinian curator Ximena Caminos, The ReefLine is intended to respond to, and raise awareness of, the way climate change is causing rising sea levels and coral reef damage in the coastal city.

"The ReefLine is a unique project that brings attention to and mitigates the dangers of climate change in Miami Beach, while simultaneously enriching the city's vivid art scene," Shigematsu explained.

"We look forward to collaborating with a diverse group of experts and professionals on our first underwater cultural masterplan and sculpture."

The ReefLine masterplan will be composed of geometric concrete modules, stacked approximately 20 feet (six metres) under water and approximately 900 feet (247 metres) off shore. They will run seven miles from South Beach at the southern end of the city all the way to the north to enhance the coastal resilience of the Miami Beach shoreline.

As climate change warms the ocean and causes damage to coral, this structure is also intended to act as an artificial reef where endangered marine life can live.

To achieve this, structures will be constructed with State of Florida-approved materials for artificial reef deployment. According to the team this includes concrete and limestone as they are chemically similar to natural reef substrate. 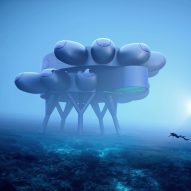 "The ReefLine will provide structure for corals and sponges to naturally colonize, adding biodiversity to an area that is currently an underwater desert of sand," Caminos told Dezeen. "In the future, we are looking into the feasibility of transplanting nursery grown corals to the structure from University of Miami's Rescue-a-Reef programme."

Artworks installed in between the concrete framework will also be made of similar materials and intended as an extension of the reef. Contributing artists will have access to a 3D printer that is able to replicate artificial reef modules from cement to include in their designs.

Featured projects are being curated by Caminos, who is also the founder of BlueLab Preservation Society, and a curatorial advisory board. The project is being completed with Coral Morphologic, City of Miami Beach and the University of Miami.

"This series of artist-designed and scientist-informed artificial reefs will demonstrate to the world how tourism, artistic expression, and the creation of critical habitat can be aligned," Caminos explained.

"The ReefLine is a singular investment in civic infrastructure, public art and environmental protection that will pay dividends over the coming decades and attract ecologically-minded tourists and art lovers to Miami Beach."

OMA is also among the contributing artists and will be one of the first to complete its structure in the sea. Its design will be composed of spiral stairs rotated around a circular opening overhead.

Argentinian conceptual artist Leandro Erlich, meanwhile, will create a sculpture of a traffic jam. The project will be an underwater version of his Order of Importance installation, which featured 66 sand-covered sculptures of cars and trucks on Miami Beach to raise awareness of the climate-change crisis.

Construction on The ReefLine is set to begin next year and will be completed in seven stages. The first mile is slated to finish in 2021. 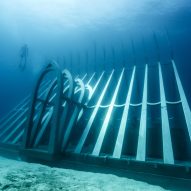 The ReefLine is among a number of projects venturing under the sea. Earlier this year Swiss designer Yves Behar unveiled his design for French ocean conservationist Fabien Cousteau's underwater pressurised research station that will be "the ocean's equivalent to the International Space Station".

Other completed underwater architecture projects include a restaurant in Norway by Snøhetta, a Maldives villa with a bedroom under the sea and the Coral Greenhouse by Jason deCaires Taylor on the seabed off the coast of Australia.

Renderings are courtesy of OMA unless stated otherwise.