Dezeen teamed up with House by Urban Splash to host a live talk about how new neighbourhoods can be built to prioritise wellbeing and sustainability.

Named Housing: A blueprint for the future, the talk was moderated by Dezeen's founder and editor-in-chief Marcus Fairs, and featured Suzy Jones, director of the Future Lab division of House by Urban Splash as well as Kenta Konishi, CEO of Sekisui House UK and Albert Hall, founder of The Modern House.

The talk coincided with the launch of Live Well by Design, a manifesto that sets out the principles that guide House by Urban Splash's building projects. 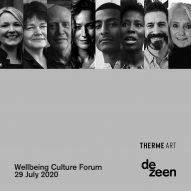 House by Urban Splash offers home buyers the opportunity to customise their homes, which are built off-site in a factory. While rare in Britain, modular housing is common in Japan, where Sekisui House is the biggest housebuilder and specialises in modular construction methods.

During the panel discussion, the speakers explored how well-designed homes and neighbourhoods make us happier and healthier, encourage us to live in our homes for longer, and create strong communities with biodiversity, sustainability and flexibility built in.

As director of House by Urban Splash's research and innovation-focused Future Lab, Jones leads teams of specialists exploring the impacts of societal, environmental and technological change on the design and development of homes and communities.

Previously, Jones was director of RIBA North, the Liverpool-based wing of the Royal Institute of British Architects. She studied Interactive Arts at Manchester Metropolitan University and Visual Anthropology at the University of Lapland.

Konishi acted as the managing director of Sekisui House in Singapore before moving to London in 2019 to inaugurate the UK branch of the company as its CEO.

Sekisui House is expanding into the British housing market through its part in the House by Urban Splash partnership. The company, founded in 1960, is one of the world's largest housebuilders, with cumulative sales of over 2.4 million homes.

In Japan, Sekisui House has built more than 44 thousand net-zero energy houses, and is known for its "gohon no ki" (meaning "five trees") landscaping concept, by which it pledges to plant tree species that are suitable for local ecosystems as part of each project.

Hill was working as the design editor at Wallpaper* magazine when he and fellow journalist and art history graduate Matt Gibberd co-founded design-led estate agency The Modern House in 2005.

The pair saw an opportunity for aesthetically-led real estate and sought to bring an editorial sensibility to what they saw as a staid housing market.

Hill has written for The Guardian, The Times and The Independent, contributed to a number of books and commentated on architecture and property on television and radio.

Housing: A blueprint for the future took place on 8 December at 11am UK time. See Dezeen Events Guide for an up-to-date list of architecture and design events taking place around the world.