Dezeen promotion: an abandoned wine factory converted into a hotel by Athens architects K-studio has been named Ultimate Winner of the AHEAD Global Awards in a livestream broadcast on Dezeen today.

Built within the derelict structures of an abandoned wine factory on Greece's western Peloponnese coastline, the Dexamenes Seaside Hotel took home the highly coveted AHEAD Global Ultimate Accolade as well as the Creative Conversion Award.

Untouched since the 1920s, the wine factory's existing buildings were sensitively preserved by design practice K-studio while interventions that would complement their brutality were added.

On site, the studio were presented with two concrete blocks that were divided lengthwise into two rows of 10 storage tanks. These tanks became the identical hotel rooms arranged in a linear plan with their openings towards the adjacent beach.

A wide promenade raised above the sand and leads down to the water connecting the rooms to a lightweight structure at the end of the block, which houses the reception, bar, dining room and lounge.

Judges described the design as "the height of unpretentious luxury" and praised it for respecting both its past and its surroundings.

"This transformation was the main challenge of the project," commented K-studio, which has previously designed a Greek restaurant in London that references old Athenian eateries. "We worked with the bare aesthetic of the site without introducing any elements or materials alien to it. This defined our palette of concrete, steel timber and engineered glass."

"New construction leaves the existing buildings relatively untouched to retain their strong presence and we contrast and balance old and new by using the industrial palette in an elegant way," it added.

The Ultimate Winner is the top accolade given at the AHEAD Global Awards – a virtual hospitality design award show that took place over three days and marks the culmination of eight regional AHEAD events that took place throughout 2019 and 2020. AHEAD stands for Awards for Hospitality Experience and Design. 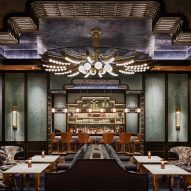 AHEAD Global reveals the world's best hotel designs in livestream

As well as the ultimate winner and the category winners, which were selected from the shortlist by a panel of over 60 judges from across the hospitality and design industries, AHEAD presented a People's Choice Award to the Santa Monica Proper Hotel designed by local firm Howard Laks Architects, which was voted for by a live audience during the second day of the ceremony.

With a living room-style lobby and details that allude to its beach setting, the Californian hotel's relaxed interior designed by Kelly Wearstler was described as "carefully considered, densely layered but never overpowering".

The judges especially liked its "intimate residential feel" which Andrei created by sourcing one-of-a-kind furnishings from across the world such as a limited edition chair by Charles Kalpakian and a vintage Ultrafragola mirror by Ettore Sottsass.

A 36-tent safari camp near Sri Lanka's Yala National Park secured the Gamechanger Award. The judges selected the Wild Coast Tented Lodge on account of its iconic architectural form which was created on a limited budget.

The Amanyangyun hotel in Shanghai was crowned winner of AHEAD's Regeneration category. Designed by Kerry Hill Architects as part of a restoration of a 2,000-year-old forest, the project also involved the preservation of several antique buildings from the Ming and Qing dynasties that were salvaged from their original site in Jiangxi province, to avoid demolition to make way for a new dam.

The judges applauded the way the project celebrated craftsmanship, history and culture.

The awards ceremony also acknowledged hotels built in remote locations with a dedicated Rural Retreat category, which was topped by the Omaanda in Namibia – a lodge set within the 9,000-hectare Zannier Reserve near the Namibian capital Windhoek.

Conceived by Zannier Hotels, the camp was built using the traditional building methods of the Owambo, the largest ethnic group in Namibia.

The Sanctuary Award went to The Retreat at Blue Lagoon – a 62-room resort hotel embedded in the lava formations and turquoise geothermal pools of Iceland's Blue Lagoon complex within the UNESCO Global Geopark.

Despite the current Covid-19 restrictions that make socialising more difficult, AHEAD chose to celebrate those hotels with exceptional public areas with its Social Scene category.

The Standard London by ORMS topped the list thanks to its rooftop restaurant by Peter Sanchez Iglesia and ground floor reception, bar and restaurant, all of which boast colourful, 1970s-inspired interiors by Archer Humphryes Architects.

Described as "a dramatic addition to the Bangkok skyline", the 33-storey Rosewood hotel in Bangkok took home the Urban Award - an accolade created for the best large, luxury newbuild property in an urban location.

The building's form, designed by Kohn Pedersen Fox with Tandem Architects as executive architect, is inspired by the wai – the Thai gesture of hands pressed together in greeting.

The winners were announced in a livestream broadcast on Dezeen today hosted by Sleeper Magazine's editor-at-large Guy Dittrich.

<em>This article was written by Dezeen for AHEAD as part of a partnership. Find out more about Dezeen partnership content <a href="https://www.dezeen.com/partnerships/">here</a>.</em>