This garden house in suburban Adelaide was designed by architect-in-training Reuben French-Kennedy as a retirement home for his parents.

Willunga House is designed to work in harmony with nature, offering views of the surrounding landscape while minimising its carbon footprint through passive heating and cooling techniques.

At the same time, its form and layout are designed to be accessible as possible, making life easy and enjoyable for a couple in their later years.

"The challenge as I saw it was to create a home which successfully met the brief and all functional requirements, and adopted passive design techniques whilst achieving its own expressive architectural identity," said French-Kennedy.

Windows were key to meeting the design work. French-Kennedy realised that, by locating the building to the rear of the site, he could create a spacious garden in front. The front elevation could then become a window wall, looking out over the garden to the view beyond. 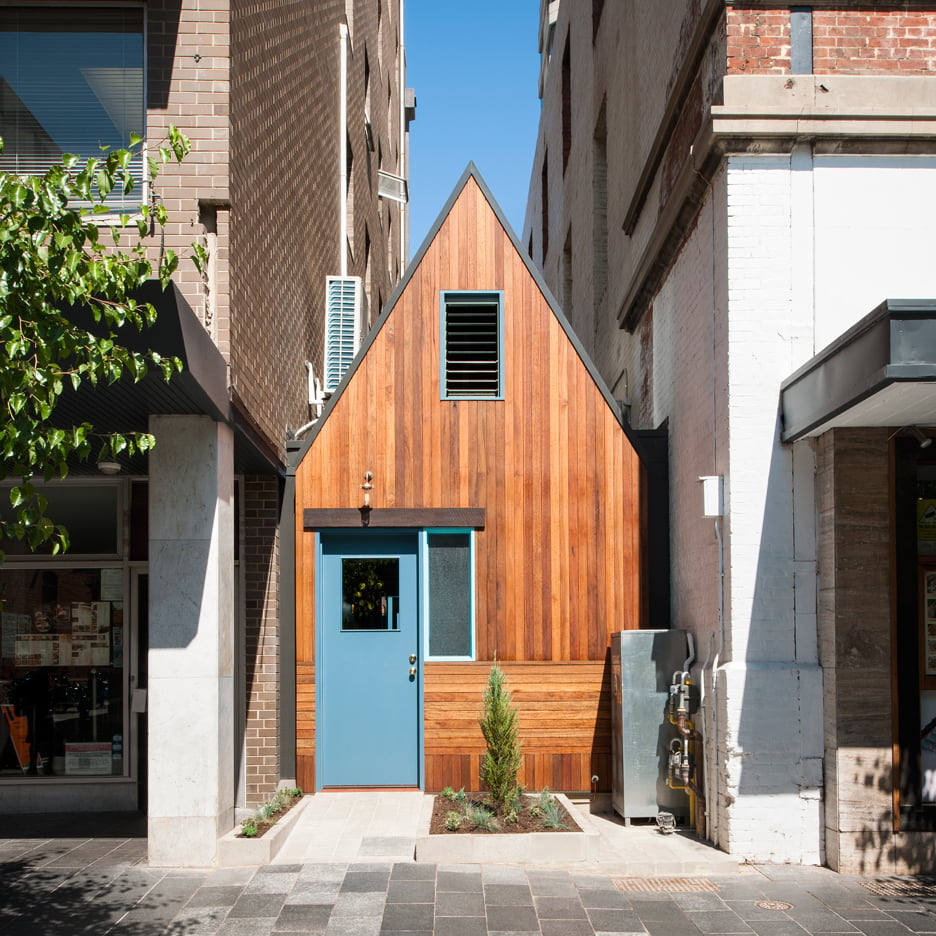 "By strategically perching the building within the hillside, we were able to sit high enough in the landscape to capture the views, but low enough to avoid a balustrade on the deck, enabling an uninterrupted view from the kitchen and living space," said the designer.

This wall of glazing not only offers views, but also captures heat from the sun, passively warming the interior during the cooler winter months.

To prevent the house overheating in the warmer summer season, large eaves provide shade when the sun reaches a certain height in the sky.

The 190-square-metre building is L-shaped in plan, wrapping the rear and side of the roughly rectangular site. It is organised over a single storey, apart from a garage slotted underneath at one end.

The interior is a mix of open-plan spaces and private rooms, designed to suit the couple's needs both now and in the future.

The kitchen, dining area and lounge all occupy the central section of the house, with a study space located in a partially screened area on one side.

The master bedroom suite occupies a more private area at the western end of the building. There's also a guest bedroom, which could be used by a live-in carer, and a separate studio that can function as a workspace or as a living room.

French-Kennedy chose a simple palette of materials for both inside and outside surfaces. Galvanised metal creates a weather-proof skin around the exterior, while the terraces and interior spaces are lined with ash wood.

The floor is polished concrete, warmed by an underfloor heating system that is powered by rooftop solar panels and a hydronic heat pump.

These material details are consistent in the fittings. The kitchen island boasts the same concrete aggregate as the floor, while countertops are made from wood.

"Whilst the building form is bold and contemporary, it is softened by the humble materiality of corrugated iron and timber, taking cues from an Australian building vernacular and the clients' agricultural background," said French-Kennedy.

Photography is by Peter Barnes.