Minimal white living spaces lie behind the blackened timber facade of this extension that Studio Hallett Ike has added to a Victorian flat in north London.

The flat, which has been titled ER Residence, occupies the ground floor of a Victorian terrace. Studio Hallett Ike said that, prior to its intervention, the flat had a well-proportioned layout, but unfortunately was only able to accommodate a single bedroom.

Now, thanks to a rear extension, the flat contains a second bedroom – which doubles up as a study – and a dining room.

"Essentially we wanted to create a property that would work for a young family living in London that wants an aspirational, clean, minimal design whilst retaining a realistic project budget," the studio's co-founder, Madeleine Ike, told Dezeen.

"The idea being that it could act as a case study for other London residents in the same situation without a huge budget."

The extension is rectilinear in form and clad with beams of blackened English larch, which were charred by hand on-site.

"Doing this, rather than painting or staining, allows the texture and grain of the larch to feel very present, and to age and patina over time," the studio explained.

"The colour changes depending on the weather and time of year; during the winter months it has silvery hues, but evolves to appear warmer in the summer."

Two different-sized windows also punctuate the extension's exterior, which are both framed with aluminium.

The slightly wider window looks through to the bedroom-cum-study, which has been finished with clean white walls.

A wide panel of Douglas fir wood has been set at the rear of the room, serving as a headboard for the bed. To the side of the room is a three-tier shelving unit and a desk where inhabitants can sit and work. 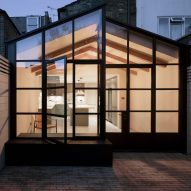 The narrower window in the extension offers a view of the dining room.

Douglas fir has been used here again to create a seating bench – a cut-out in the shape of a cat's head has been made in the bottom corner, through which the owners' feline companion can crawl to access a cosy cubby.

Studio Hallett Ike has continued the colour and material palette of the extension through to the rest of the home. The updated kitchen, for example, boasts Douglas-fir cabinetry and a white terrazzo splashback.

Grey terrazzo has then been used to line surfaces in the bathroom.

Walls in the living area have been coated with a pale grey plaster that stops just beneath the room's original plaster cornicing. The existing wooden floorboards here were also preserved and sanded down to expose more of their natural grain.

Black-metal furnishings such as the coffee table and overhead lighting fixture were included to "give weight and depth" to the space.

"The overarching design approach was to carry out a small number of strong but simple moves that are consistently applied, sitting at the heart of every design consideration," added the studio.

"These come together to create an overall impression that is minimal and timeless, exuding an assured and understated elegance."

Studio Hallet Ike was founded by Madeleine Ike and Jonty Hallett in 2018. The studio's ER Residence isn't the only London property to feature a charred-wood extension – Rider Stirland Architects added a blackened timber volume to a house in Ladywell.

Will Gamble Architects also used scorched wood to create a Japanese tea house-style extension for a home in Fulham.