The Italian government is planning to add a retractable floor to the Colosseum amphitheatre in Rome so that performances can be held within the arena.

Under the plans developed by the Colosseum Archaeological Park and Italy's Ministry of Cultural Heritage and Activities and Tourism, the arena's long-disintegrated floor will be reinstated.

"The reconstruction of the Colosseum arena is a great idea which travelled around the world," said minister for cultural heritage and activities and tourism Dario Franceschini in a statement.

"It will be a great technological intervention which will give visitors the chance not only to see the basements but to admire the beauty of the Colosseum from the centre of the arena."

The Italian government is looking for a design team to create a retractable floor that will be placed in the centre of the arena above the hypogeum – an area under the arena's wooden floor.

At the Colosseum, the elaborate two-storey hypogeum, which contained eighty lifts to bring animals and gladiators directly into the arena, has been exposed since the wooden floor decayed.

The current plans will see a retractable floor installed above the hypogeum so that this area can still be seen, but can be covered so that it is protected from bad weather and can be used for performances.

"The goal is to make the surface of the Colosseum arena floor usable again and to identify a compatible and reversible technological solution for covering the underground spaces," explained a statement from the Ministry of Cultural Heritage and Activities and Tourism.

"The interventions must be designed in such a way as to simultaneously offer the perception of the level of the arena on which the games took place and the vision of the complex system of underlying structures and mechanisms."

Retractable floor to be installed by 2023

Set to be built by 2023, the retractable floor will include a series of lifts to connect the underground area with the arena floor and is expected to cost 18.5 million euros. Design teams have until February 1 to submit bids. 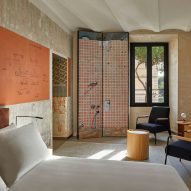 "The new arena will have to be conceived as a unitary floor, with a high technological content, consisting of mechanised opening and closing devices, allowing visitors to understand the synergy and the close relationship with the underground, also using systems that refer to the mechanisms of the lifts and of ancient mobile scenes," continued the Ministry of Cultural Heritage and Activities and Tourism.

Completed in 80AD, the Colosseum could hold between 50,000 to 80,000 people and was used for gladiatorial contests during the Roman Empire.

Following the fall of the Roman Empire, the arena fell into disrepair but remains one of the most recognisable symbols of Ancients Rome. It is one of the most visited attractions in Rome with around seven million tourists visiting annually.

Main image is by Nicholas Hartmann via Wikimedia Commons.