Developing a masterplan for the planet could entrench existing inequalities and make climate change worse, according to the architect behind the new Planet City movie.

Architect Liam Young described the Masterplanet project by Bjarke Ingels Group (BIG) as "a continuation of the colonialist project that has already masterplanned the planet in its own image".

Instead, Young has presented an alternative vision of a future planet Earth in Planet City, a short animated movie depicting a dense metropolis for 10 billion people that would free up the rest of the planet for rewilding and the return of ancestral lands.

"It is just worth calling out the differences between these types of works," Young told Dezeen.

"The imposition of singular visions by starchitects just repeats so many of the mistakes that have got us into this situation in the first place."

Top and above: Planet City is a concept for a city for 10 billion people

Both Young and BIG, which is led by architect Bjarke Ingels, propose conceptual solutions for a world with 10 billion people, which is Earth's projected population in 2050.

Contrasting visions for a world with 10 billion people

By contrast, BIG's Masterplanet concept involves scaling up existing infrastructure to cover the entire planet, including creating a single global power grid and an international network of recycling plants.

"The typical techno solutionism that Bjarke Ingel's project is an example of is indicative of the general response of the design community to issues such as the pandemic or climate change," said Young.

"Such proposals are a continuation of the colonialist project that has already masterplanned the planet in its own image, he added. "Plans of this scale have historically perpetuated forms of exclusion and reinforced existing systems of power.

"Most of these projects rarely engage with these root causes of climate change and in fact enable them."

The debate comes as architects and designers turn their attention to designing holistic solutions to global problems such as climate change, pollution and environmental degradation.

In an interview with Dezeen last year, Winy Maas of MVRDV called on architects to design new planets to help understand how to solve problems on Earth.

"It would be wonderful to design more planets and to compare them because there are different dreams," said the Dutch architect.

"It would be very useful in that way to fantasise on that because it would mirror what we should do now."

Maas added that the planet needed to be managed in the same way that landscapes are managed in countries like the Netherlands, with areas set aside for nature, farming and power generation as well as for human habitation.

"We will be with 11 billion people soon," Maas said. "We have to manage that growth. Some of us will go to the tundras in order to survive."

"We have to deal with that and with the new densities that [will] occur and also to keep enough emptiness for oxygen and water management."

Speaking at a Dezeen talk in 2018, designer Jalila Essaïdi called on designers to propose audacious solutions to global problems.

Essaïdi praised Elon Musk's plan to build colonies on Mars as an example of the big-scale thinking that is required on Earth. 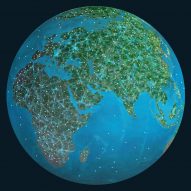 "It would be wonderful to design more planets," says Winy Maas

"At first you have to think about the rockets to Mars before you can apply them here," she said. "It's a dream, an escape, but maybe you find aspects you can use here [on Earth]."

However, Young said that simply scaling up existing solutions is no longer appropriate for the global problems the world faces.

"What we actually need is an entirely different way of organizing change," he said. "Climate change is a political and ideological problem, not one that can be solved with Bjarke's new global power grid."

"Projects need to engage with the necessary cultural and ideological changes that are needed to support the implementation of these technologies," he added.

"Utopias of the imagination, projected into reality or these speculative fictions that masquerade as real solutions, without this complex engagement with their embedded politics are deeply problematic."

While admitting that his Planet City vision is "implausibly extreme", Young said that his short movie was intended as a provocation to trigger discussion about the failure of existing systems.

"Planet City is a fiction shaped like a city," he said. "It doesn't pretend to be an executable proposal, it is a provocation that engages and celebrates the value of fiction as a product in and of itself."

The Planet City concept is based on a consensus between human cultures, rather than a top-down masterplan.

"Set against the consistent failure of nation-states to act in any meaningful way against climate change, Planet City imagines emerges from a global citizen consensus, a voluntary and multi-generational retreat from the sprawling cities we all inhabit," Young explained.

Planet City is an alternative to "a singular design vision"

While Planet City is a fictional construct, Young said it presented an alternative to "a singular design vision or a central governing body enforcing a decree."

"Instead, network-enabled movements like the global climate strike and climate march, some of the largest gatherings of humans in history, act as a template for the early rumblings and first mobilisations of Planet City," he said.

"It is about allowing space for multiple voices not the PR informed manoeuvres of a singular star architect whose very value is tied up in the systems that have created much of the problems in the first place."