London designer Tom Robinson used 100 per cent recycled plastic from e-waste to produce his Evolve Chair, which aims to give the manmade material a more natural feel.

The black chair is constructed from recycled plastic sheets made by Netherlands-based The Good Plastics Company from e-waste, such as discarded laptops and computers.

Its colour comes from the black plastic of the electronics, which is crushed and granulated before being formed into plastic panels. The designer believes this process gives the material a look and feel that isn't usually associated with plastic.

"This new reprocessed panel resembles something closer to a porous wood or stone, rather than something artificial," said Robinson.

He wanted to highlight this aspect of the material, which he initially came across during early workshop tests. These revealed that the deeper into the panels he milled, using a CNC machine, the darker the semi-porous layers got, creating a more organic effect.

"Evolve's design was born from a need to present recycled plastics in a way that people could actually want to have it in their homes – whether it be in a flat or farmhouse kitchen," Robinson told Dezeen.

"Plastic by its very nature is considered industrial, machine-made and artificial – it feels quite fitting and important to show 'recycled' plastics as something that can appear more natural, crafted and synonymous with the interior landscapes of today."

The resulting chair has a minimalist, geometric shape with softly rounded corners that seems to nod to the shape of the laptops, computers and keyboards. 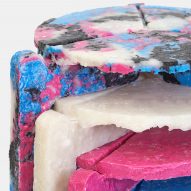 "From a design standpoint the chair's logical and minimal appearance is a result of a very pragmatic approach to material and form – a strong and enduring base structure with functional, graphic details that have been cut away to reveal some surprisingly beautiful textures," Robinson said.

"The chairs proportions and useful details, such as the handles and angled leg fronts – to avoid scuffs and wear – were developed through 1:1 scale models using scrap material," he added.

The base of the piece consists of four panels – a seat, two legs and a central beam – which is turned into a chair by adding the seat back. This can be removed to use the chair as a stool.

Robinson and his team cut the plastic panels in his London workshop using a table saw before they are hand-routed or CNC-milled, and then assembled with dry-fit Festool Domino Connectors.

"At the end of its life you can recycle the plastic components and re-use the metal connectors," Robinson said.

Robinson envisioned the product as a scalable, adaptable piece of furniture, and designed it to be flatpacked in order for it to have a smaller footprint when transported. It is the first edition in a series planned to change the perception of waste materials.

"I would always favour natural materials in any walk of life – but given the 'casual' 6.3 billion metric tons of waste plastic we have produced on Earth; it felt imperative to find a logical way to use this resilient material resource and save the harvesting of virgin material," Robinson said.

As The Good Plastics Company's panels are made from a single type of plastic, they can also continue to be recycled. 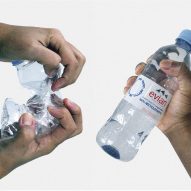 In December 2020, The Good Plastics Company's founder William Chizhovsky joined Dezeen for a live talk hosted by the Material Lab on the challenges of making sustainability mainstream.

Robinson is also a designer at Viewport Studio whose Essential Furniture collection, made from discarded timber, won furniture design of the year at Dezeen Awards 2020 and also won the public vote in its category.