Pritzker Prize-winning architect Richard Rogers and his co-founder Graham Stirk worked on the high-rise building, which will be clad in distinctive copper fins.

The 23-storey building will contain 30 residences, featuring floor-to-ceiling and wall-to-wall windows overlooking City Hall Park. At 91 metres high, the building topped out in 2020 and is due to be finished this year.

Dark-coloured steel-framing on the facade was chosen to connect the building to Lower Manhattan's industrial past.

No 33 Park Row's metal exterior is designed to recall Rogers' famous high-tech architecture project, the Centre Pompidou in Paris, while its location is reminiscent of Rogers Stirk Harbour + Partners' One Hyde Park.

"One Hyde Park and No.33 Park Row each face a park to the north," said Stirk.

"[Both] exhibit a similarity in terms of aspiration and quality with carefully composed facades that exhibit a richness of depth, shadow, and texture."

To make the most of the location, the residences and communal facilities will all be orientated north towards the park.

The residences, which range in size from one to five bedrooms, will be arranged between the sixth and 23rd floors and some of them will have balconies and terraces. 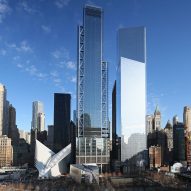 Rogers Stirk Harbour + Partners designed the project for Centurion Real Estate Partners. It will be the first residential project in New York designed by the practice, which completed the 80-storey Three World Trade Center in Manhattan in 2018.

The firm has also designed residential projects such as the Neo Bankside development in London and a trio of skyscrapers in Sydney. One Hyde Park, which completed in 2011, contains the most expensive apartment in the UK.

Richard Rogers stepped down from Rogers Stirk Harbour + Partners at the end of last year at the age of 87.