TOB Architect has added a monolithic extension to a Victorian townhouse in Dublin, Ireland, with exposed concrete interiors that are intended as a protective shell for its inhabitants.

Named Hollybrook Road after the street on which it is built, the statement extension was designed for a young family that offered Irish studio TOB Architect an open brief.

The family's only requirements were that the extension introduced a new kitchen and dining area to the home, alongside a utility room and a pantry.

TOB Architect used the project as an opportunity to experiment with concrete – a material with which studio founder Thomas O'Brien claims to have an "obsession".

"The client was very open-minded as to how the brief was realised," O'Brien told Dezeen.

"I wanted to just jump in with the use of concrete – no messing, all or nothing," he continued. "I have an obsession with it, wanting to make imperfect, non-precious use of it, I love the risk of it."

The Hollybrook Road extension was cast-in-situ as one single, geometric form, with the goal of creating a seamless interior finish with a cavernous and protective quality.

To achieve this, all the insulation was added to the building's exterior and then finished with a French Parexlanko render that has a gravel-like texture.

"The making of the interior spaces took precedence over what the building might look like as an object externally," said O'Brien.

"The effect of the interior is akin to being a child under a very robust table," he continued. "It feels strange but also protective. Its uncanny character is intended to offer respite from the world of work and toil."

Inside the extension, the rooms are arranged as a sequence of spaces to help stitch the old and new together. The first room is a reversed L-shaped pantry, positioned six steps down from the rear of the house.

The pantry, which incorporates a hidden toilet and utility area, folds round to meet the new kitchen and dining space that are positioned furthest from the house. 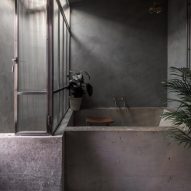 The kitchen and dining space form the main bulk of the extension and are positioned to the centre of the site, away from the boundary walls, to ensure that natural light can enter from both sides.

Hollybrook Road's furnishings and finishes are made with a deliberately restrained material palette in an effort to retain focus on the textures of the concrete shell.

They include bronze-tinted glass, a speckled terrazzo floor and walnut joinery, complemented by the stained Accoya wood that is used to frame the windows and doors.

"The project has a reduced palette of material compared to other work I've done," said O'Brien.

"In this project, because it is predominantly about the concrete, the beauty is found between rough and smooth surfaces and how the light moves on them," he continued. "[The wood] was chosen in line with reducing the palette to a minimum of materials so that the concrete could be the central effect."

A standout feature of the Hollybrook Road extension's interiors is the angular, concrete fireplace, which occupies one corner of the dining area.

Externally, this is marked by a tall, concrete-capped chimney that is set at 45 degrees to the extension and punctured by a circular opening. Described by the studio as a "humorous" addition to the building, it is designed to deliberately disrupt the orthogonal layout of the extension and contrast with brick chimneys on the neighbouring Victorian houses.

TOB Architect was founded by O'Brien in Dublin in 2013. Elsewhere in Ireland, the studio also recently completed a farmhouse in Ireland with a mix of exposed, untreated materials to offer it with an intentionally unfinished appearance.

Other residential extensions featured on Dezeen where concrete takes centre stage include Szczepaniak Astridge's extension of the Untitled House in Camberwell, London, and The Pink House by Simon Astridge, for which the material was pigmented a deep, dusty pink colour.