Eggs are hung from the ceiling, balanced on spinning tops and stacked on top of each other in a series of deliberately perilous contraptions created by industrial designer Liang-Jung Chen.

Entitled The Egg Rack Made a Disclaimer, the project was presented in an exhibition at Gallery Error22 in Tainan, Taiwan and prefaced by a warning to "interact with the egg racks at your own risk".

The 12 egg holders resemble abstract sculptures – rendered in timber, acrylic or metal – but were designed to be set in motion to test the limits of their stability.

In this way, the exhibition acted as a kind of social experiment to gauge people's reactions to the vulnerability of the eggs and explore the different, often contradictory meanings that they can take on.

"Eggs are sacred – they are incubators of new life. So their fragility is a tool to demand proper attention and care from the parents," Chen told Dezeen.

"It seems strange how they have become industrialised and commodified. However the quality of the fragile shell stays the same, so we have designed ways to keep them safe, so we can eat them," she added.

"The egg came into existence as this perfect, clean form of hope. However, when accidentally broken, it becomes nasty, it smells bad and the liquid is tricky to clean. It is such a multifaceted symbol in my eyes."

In order to draw out this dichotomy, the precarious installations are designed to tempt the viewer to act against their better instincts and touch the rack, even if it risks breaking a few eggs.

"The potentially shocking moment of breaking eggs in the exhibition is also an unforgettable experience I wanted to offer to the visitor – the guilty feeling of hurting someone or causing damage," said the designer.

According to Chen, the most accident-prone installation proved to be Rack #03, in which a single egg is perched on a thin brass-wire frame resembling a rocking chair.

"I find that people have this natural urge to see it rock, it's almost inviting you to give it a push," she said. In total, only 20 eggs were broken during the 18-day exhibition.

The project was based on an intensive research period, in which Chen analysed the shape and weight of an average egg and the way it responds to movement.

Each of the racks was then designed around a particular movement, either of the egg itself or of its holder.

Rack #12 balances an egg on a smooth, wooden spinning top, while another sees it placed inside of a metal cone and whirled around in a circle, much like the party game Spin the bottle.

Another contraption involves eggs being slotted into clear acrylic disks with holes at their centre and strung up, one on top of the other, to create swinging pendulums.

"Most egg racks are designed to store eggs horizontally, so I wanted to make the stacking vertical," said Chen.

"They are hung up on strings so if you give the piece a gentle push, the eggs will move in a wave shape that is almost like vertebrae in motion."

Several of the designs experiment with thin, metal sheets, which are nailed to the wall to create a mini catapult or used to hold an egg as if between long, wobbly tongs. 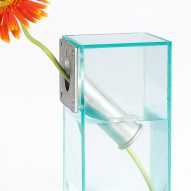 In Rack #02, one of these sheets is bent to create a kind of bridge, with two eggs balanced shakily in holes at its centre.

As a visual metaphor for the idea of 'walking on eggshells', Chen even designed the exhibition's display plinths to look like they were being held up by eggs.

In truth, the white ovals were simply pieces of polystyrene that she polished with filler to create a realistic finish.

Chan, who is based in London and currently a resident at the Makerversity in Somerset House, often reimagines everyday items in her work.

Previously, she has collaborated with Shuei-Yuan Yang to create household goods from unexpected industrial hardware as part of The Misused project.

The results included a modular shelf made using an air vent and a dish rack made from bird spikes.

All photos are courtesy of Liang-Jung Chen unless otherwise stated.

The Egg Rack Made a Disclaimer was on view at Gallery Error22 in Tainan from 10 to 31 December 2020. See Dezeen Events Guide for an up-to-date list of architecture and design events taking place around the world.