The studio converted the barn, which was previously completely open on two sides, into a home that retained its agricultural industrial aesthetic and materiality.

"Metal-framed, barrel-vaulted Dutch barns have a distinctive appearance, structure, form and materiality and it was key to us to retain this character and aesthetic," said Sandy Rendel Architects founder Sandy Rendel.

"Besides their clear form and colour, the language and character of these buildings is heavily defined by the materiality and detailing of their skin."

Set on the edge of the Sussex Prairies public garden, which the owners founded 12 years ago, the barn was converted into a three-bedroom house.

Now fully enclosed, the barn retains its distinctive barrel-vaulted silhouette and is entirely clad in black corrugated steel to replicate the original walls.

"By converting this historic structure the owners are now able to enjoy living as well as working within the public garden's midst," said Rendel.

"It sits alongside a series of other agricultural buildings which are now in use to service the garden and together form the backdrop to this public landscape," he continued.

"As such its design reflects its original character of these retained buildings and that of the history of the site."

Sandy Rendel Architects reclad the barn and divided it in two by adding a first floor. Internally the roof was reinforced with steel trusses. 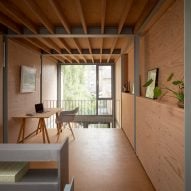 "Structurally the key interventions were the addition of a new floor within the shell and the replacement of the roof trusses which were inadequate for the new roof build-up and loads," said Rendel.

"We worked closely with engineer Structure Workshop to develop a design for these trusses that retained the character of the original and were finished in a red side paint to reinforce their utilitarian roots and material quality."

The home's entrance, three bedrooms and an office are located on the ground floor with the entire upper floor given over to an open-plan kitchen and dining room.

"The upside-down arrangement allowed an open plan layout for the living spaces at the first floor, opening up the interior to the full extent of the barrel-vaulted roofline and structure whilst offering elevated views over the expansive public garden and to the South Downs beyond," explained Rendel.

Following the conversion, the studio intends on adding a cylindrical steel tower that will resemble a grain tower and act as a private terrace for the owners and a raised platform for visitors to view the garden.

Overall, Rendel hopes that the house will allow the owners to enjoy the adjacent garden and contribute to the character of the site.

"We love the abstract composition of the elevations which frame key views out into the garden and are accented with galvanised shutter rails which cut through the cladding," he said.

"The appearance echoes a loose, ad hoc approach to the design, adaptation and repair that is common to the original farm buildings on the site and characteristic of agricultural buildings in general."

London based Sandy Rendel Architects was founded by Sandy Rendel 2010. The studio previously designed a 2.8-metre-wide skinny home in Peckham and a riverside house with an upper storey clad entirely in weathering steel mesh.