A roofscape modelled on patterns of migratory birds will shelter the four wings of the Zhuhai Jinwan Civic Art Centre that Zaha Hadid Architects is developing in southern China.

The cultural building, which is under construction in the Jinwan District in Zhuhai, will be built within a lake and incorporate a 1,200-seat theatre, a multifunctional 500-seat hall, a science centre and an art museum.

According to Zaha Hadid Architects, the goal for the building is for it to become "a hub of contemporary creativity" for the region.

Its site was therefore chosen for its proximity to the new Zhuhai Airport Intercity railway, which connects the city, its airport and Hengqin district to Guangzhou, Shenzhen, Macau and Hong Kong.

Once complete, the Zhuhai Jinwan Civic Art Centre will measure 170 metres in width and 270 metres in length, from north to south. It will be divided into two large and two small wings, which will become individual venues for the theatre, multifunctional hall, science centre and art museum.

These four venues will be arranged symmetrically around a central plaza, which will serve as a shared, external foyer. This will be accessed by bridges over the surrounding lake to the banks.

Externally, the Zhuhai Jinwan Civic Art Centre will be distinguished by its distinctive, folded roof structure, which will be composed of prefabricated, triangular panels made from perforated steel.

According to Zaha Hadid Architects, these panels are modelled on the chevron patterns made by migratory birds flying in formation over southern China. 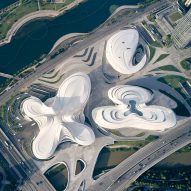 Perforations in the roof panels will help filter light inside the building and these will vary in size depending on the requirements of the spaces below.

The roof will also overhang each of the four wings, providing solar shading for their facades that will be made of double-insulated glazing.

Inside, the interior design for each of the centre's four wings will be unique, which Zaha Hadid Architects says is to ensure "the most engaging visitor experiences".

It is expected that the theatre and art museum will have a light material palette, while the multifunctional hall and science centre will have darker finishes.

The lake surrounding the centre will be introduced as part of the landscaping for the centre, which has been developed to align with Zhuhai's "sponge city" initiative. Sponge cities are being developed in urban areas throughout China to help mitigate flooding, water pollution and water scarcity.

The artificial lake will help to store excess water, and also incorporate aquatic flora and fauna that will naturally filter contaminants.

Zhuhai Jinwan Civic Art Centre will be complete with a rooftop piazza, alongside an external amphitheatre on its west side that will be dedicated to outdoor performances and activities.

The building's energy consumption will be monitored and minimised through an "intelligent control" system that will automatically adjust the centre's interior environments, while a waste heat recovery system will help meet the centre's hot water demand sustainably.

Zaha Hadid Architects is the eponymous studio of the late British-Iraqi architect Zaha Hadid, founded in 1979. Today the studio is headed up by Patrik Schumacher.

The Zhuhai Jinwan Civic Art Centre is the latest in a string of projects being developed by the studio across China, following the reveal of proposals for a pair of supertall skyscrapers in Shenzhen, the Xi'an International Football Centre stadium in Xi'an and Shanghai's "greenest building".

Visuals are by Minmud unless stated. Construction photography is courtesy of Zaha Hadid Architects.