Named Tipico Coffee, the cafe's identity was formed with the intention of designing a space that encourages social interactions and supports local craftsmanship.

Reclaimed furniture and lighting made from construction-site string lights feature alongside an oversized staircase to nowhere which forms amphitheatre-style seating.

The tables are grafted together and painted in sky-blue, forming a unified bar which runs along one wall of the cafe.

"The process of designing the cafe really started with the idea of the social infrastructure of the grafted bar," Jamrozik and Kempster told Dezeen.

The open bar has clusters of swivelling stools arranged around blue table-tops that jut out of the bar's customer side, allowing easy socialising between customers and staff.

"The different shapes of the tables come together to create opportunities for conversations," continued the designers.

"This is augmented with the use of swivelling bar stools that allow patrons the ability to turn their bodies to orient themselves to a new connection." 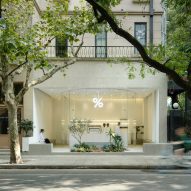 Groups of circular olive-green garden tables and chairs, as well as built-in blue benches, make up two intimate seating areas behind each side of the bar, which are separated by a wall.

The tables and chairs used are purposefully outdoor furniture. This means that the seating can be moved onto an exterior patio in the summer months.

Various scattered potted plants blend green and blue furniture together and continue the theme of bringing the outdoors inside.

Jamrozik and Kempster explained their intentions for using sky-blue as the cafe's dominant colour. 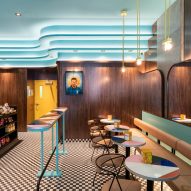 "We wanted to use a vibrant colour to visually tie together the bar and benches to create continuity in the space and give visual emphasis to the bar as the main design gesture."

"We chose blue to both complement the olive green furniture and plants, but also to create moments of contrast with the bespoke yellow lights," they continued.

The bespoke lights designed for the cafe are composed of construction-site string lights, wound around sections of aluminium stock tubes. They hang above the bar and the seating areas.

"We wanted to transform the string lights, while still making it clear what the source product was," explained the designers.

Metal pegboard is another off-the-shelf material used in the space, making up a menu board behind the bar, a merchandise display board and a community message board.

The bottom of the main bar and built-in-benches was also lined with wooden pegboard in order to "give them both a visual texture, taking advantage of the acoustic properties of the perforations," said Jamrozik and Kempster

A sense of the building's historic charm remains in the existing fireplace that is preserved, which is painted in a strip of the same sky-blue paint as the main bar.

An over-scaled stairwell acts as an additional, cosy seating area fit for a couple of customers at a time.

Sealed off by a mirror and leading to nowhere, the stairwell is intended as an "Alice in Wonderland moment," enhancing the cafe's playfulness.

"The stairway's oversized steps effectively shrink the visitor and act as seats while the mirrored ceiling gives the impression that the space continues up," explained Jamrozik and Kempster.

"We imagine people will be drawn to the curious space and hope that they enjoy the tongue-in-cheek reference that plays on the domestic history of the original building," continued the designers.

Jamrozik and Kempster note the importance of playful design in their work, which they believe connects people in public spaces.

"We use the language of play to create social infrastructures: physical prompts which encourage contact between strangers."

"We believe that questioning the way people use and occupy space and their relationship to one another through playful encounters has enormous potential to speak across generations and cultural differences," they continued.

Designers everywhere are acknowledging the importance of designing public spaces to maximise social interactions. In Montreal, Ménard Dworkind has created a cafe with a central standing bar, while Central Saint Martins graduates have created blocky outdoor furniture for a public square in Croydon, London.

Julia Jamrozik and Coryn Kempster have collaborated on design projects since 2003. Their varied work spans temporary installations and permanent interior and architectural commissions.

Photography is by Sara Schmidle.