Aretz Dürr Architektur has added a rational, double-height extension to a pitched-roof house in the town of Biberach an der Riss, Germany.

Named House B, the extension was designed to give the family home more room with living and dining spaces that directly overlook the previously disconnected garden.

"The core concept was to create a missing connection to the wonderful garden that has slightly overgrown and lush vegetation," said Aretz Dürr Architektur co-founder Sven Aretz.

"Only with the new building do the living spaces have a direct connection to the garden. The existing house ignored this potential," he told Dezeen.

The double-height extension was built from a regular steel frame with 16 slender – 100 millimetre by 100 millimetre – steel columns arranged around the edge of the rectangular extension that supports the roof and first floor.

These columns are spaced 1.95 metres apart from each other and connected to a filigree aluminium post-and-beam facade that creates five bays of windows on the garden facade and three on the sides. Each of the bays is divided vertically into three to create a strict geometric pattern.

"The appearance of the building is the result of the functional and architectural-spatial requirements," explained Aretz. 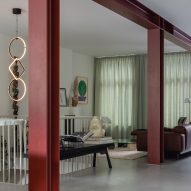 "The geometric order of the structure follows the principles of economic and resource-saving thinking. The visible and honest structure develops its character from within itself."

The impact of the geometric structure is further emphasised by 33 motorised blinds that cover the extensions windows.

"When closed, the sun protection reproduces the metrics of the facade and creates a kinship with the existing building."

Inside, the house has been broadly divided into two for the two generations that are currently occupying it.

The ground floor contains a kitchen and living room, while a secondary living space is on the first floor. The home's bedrooms were placed in the existing building.

Cologne-based Aretz Dürr Architektur was founded in 2019 by Aretz and Jakob Dürr.

Previous extensions that make use of metal include a green aluminium extension to east London home designed by DeDraft and a home with a kinetic bronze facade in Sydney.

Photography is by Luca Claussen Fotografie.