Dezeen's Facebook page has been blocked in Australia by the social media giant as part of its ongoing dispute with the country's government over a proposed law that would require it to pay news outlets for content.

Dezeen is one of numerous media companies that have had their pages blocked by Facebook in Australia since Thursday, when the company banned the viewing and sharing of content from news outlets on its site in the country.

People in Australia that visit Dezeen's page now see a notice saying "No posts yet".

Facebook made the move in response to a proposed law that would force the social media company to pay news outlets for content.

Sydney-based design journalist Sophie Davies said the move was "pretty shocking and feels anti-democratic". However, content from her website, DesignFizz, was unaffected.

"It's a shock seeing the ability to share and discuss them on such a major platform cut completely at a stroke," she wrote." At least DesignFizz is still accessible, but we're a lifestyle not a news channel!" 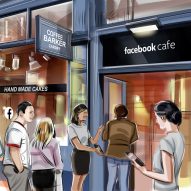 However designer Michael Young said: "I am so happy Facebook has done this. Australia is more a communist state than China."

Facebook's ban on news content follows draft legislation published by the Australian Competition and Consumer Commission, which if introduced would require the social media company and search engine Google to pay for the content.

The proposed law has been opposed by both companies.

However, while Google recently signed a contract to pay for news from Rupert Murdoch's News Corp, Facebook made the decision to ban news on its site.

In a statement announcing the news ban, Facebook said that the proposed law misunderstands the current relationship between publishers and social media companies as it believes that news companies benefit from using its platform.

"What the proposed law introduced in Australia fails to recognize is the fundamental nature of the relationship between our platform and publishers," said Campbell Brown, vice president of global news partnerships at Facebook.

"Publishers choose to share their stories on Facebook. From finding new readers to getting new subscribers and driving revenue, news organizations wouldn’t use Facebook if it didn’t help their bottom lines."

According to Facebook, news only makes up four per cent of content in people's feed, while it generated referrals to publishers in Australia that it values at AU$407 million.

The ban on news content has been widely criticised in the country.

"Facebook's actions to unfriend Australia today, cutting off essential information services on health and emergency services, were as arrogant as they were disappointing," said Australian prime minister Scott Morrison in a statement on his Facebook page.

"These actions will only confirm the concerns that an increasing number of countries are expressing about the behaviour of BigTech companies who think they are bigger than governments and that the rules should not apply to them," he continued. "They may be changing the world, but that doesn’t mean they run it."

In the UK the chairman of the government's Digital, Culture, Media and Sport Committee also criticised the move.

"I think it's staggeringly irresponsible – at a time when we are facing a plethora of fake news and disinformation in relation to the Covid vaccine," he told BBC Radio 4's PM programme.