A group of geometric concrete blocks that mimic rock pools have been installed at San Diego Bay in California by eco-engineering company Econcrete to prevent flooding while providing habitats for marine life.

The project, named Coastalock, is a coastal defence system with textured and indented surfaces that encourage organisms to latch on and colonise it.

It was designed by Econcrete as an alternative to traditional man-made flood defences that typically offer little or no value to underwater ecosystems.

Econcrete's installation was carried out with the Port of San Diego corporation on two sites at Harbor Island as part of the area's Blue Economy Incubator, a scheme for trialling new and sustainable marine technologies.

The modules replace existing riprap rock mounds – a traditional type of coastal defence that prevents flooding and erosion – which line both coastal sites.

"This Blue Economy pilot is proving that the coastal and marine construction industry can achieve two goals at once: any concrete infrastructure going into the water can perform structurally and be good for ecosystems," said Shimrit Perkol-Finkel, co-founder of Econcrete.

"Coastalock is a fully load-bearing, durable solution that changes the form and function of our developed coastlines."

Coastalock modules have an octahedral shape designed for durability and to allow them to be easily combined with other units for stability.

The size was determined to provide enough space for the textured rock pool indents, without reducing the overall strength of the unit.

Each module installed along the bay was cast on land in steel formwork, using Econcrete's patented concrete, which goes by the same name.

This material uses eco-friendly admix that includes recycled materials and gives rise to a textured finish that encourages organisms to latch on to it when installed underwater.

"Econcrete's patented admix is designed not only for structural performance but also for native marine ecosystems," Econcrete told Dezeen.

The modules were transported to the two sites site using a barge, before being lifted into place with a crane.

A total of 74 interlocking modules have been installed, with each site comprising four rows of up to 10 Coastalock units.

The orientation of each row is different, meaning the rock pool-like insets are either angled sideways, upwards or down into the water, providing different conditions for different organisms.

"The units are multi-directional, when the tidepool is faced upwards it becomes a water-retaining feature, when sideways a cave, and an overhang when faced downwards," the company explained.

Each site will be now monitored every six months for signs of colonisation and to evaluate the viability modules as an alternative to traditional tidal defences.

Econcrete expects habitation to begin with "tiny ecosystem-builders like tubeworms, coralline algae, and other local sedentary organisms", which will pave the way for more biodiverse ecosystems.

The long-term goal, however, is that the Coastalock modules will become home to calcitic organisms, such as coral and clams. 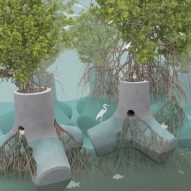 TetraPOT is a greener alternative to concrete coastal defences

This is because these organisms draw carbon from the water in order to build their skeletal forms and shells. In turn, Econcrete said, this means the system can help contribute to the storage of carbon dioxide along the coastline.

"After the units hit the water, however, they also become active carbon-capturers," it explained.

"By facilitating the growth of calcitic organisms, Coastalock boosts nature as a tool to fight climate change along our working waterfronts."

More recently, US design workshop Objects and Ideograms carried out a research project to facilitate the restoration of coral reefs, which involved 3D printing with calcium carbonate to create sustainable underwater "houses" for coral reefs