Coral Carbonate is a research project that involves 3D printing with calcium carbonate to create sustainable underwater "houses" for coral reefs and marine life to grow.

Developed by US design workshop Objects and Ideograms, the project is intended to facilitate the restoration of coral reefs – one of the most vulnerable ecosystems on Earth.

The 3D-printed Coral Carbonate objects have cylindrical bodies with porous, rocky surfaces. These are modelled on the form of natural coral skeletons, which are also made from calcium carbonate and act as the foundations of all coral reef structures.

Like coral skeletons, these units encourage the growth of reefs because the nooks and crannies in their surfaces act as homes for coral polyps and marine life to flourish.

"With rising ocean temperatures and increase in acidification, many aquatic organisms using calcification to create their homes are being rapidly destroyed," explained Alex Schofield, the architect and design technologist who heads up Objects and Ideograms.

"The goal of Coral Carbonate is to print the scaffold for a 'house' that biological organisms will inhabit and grow their own new homes and communities," he told Dezeen. "Once embedded, marine life can take advantage of a substrate most similar to their native home."

Coral Carbonate was initiated three years ago by Schofield after he learned that coral reefs around the world were experiencing unprecedented destruction due to human activity and climate change.

Looking to rapidly help create more reefs, he discovered that the solutions currently available are often made from unsustainable, manmade materials rather than those native to marine ecosystems.

"The material invention and application of Calcium Carbonate using this method of fabrication is very novel, leading us to a material formula and process that is now patent-pending," added Schofield.

Calcium carbonate is abundant throughout the world, typically sourced from limestone, marble and chalk. The studio hopes that in the future it may also be possible to acquire the material through carbon sequestration – the removal of carbon dioxide from the atmosphere – similarly to how coral polyps capture carbon from ocean water and convert it to calcium carbonate to make the skeletons.

"Waste by-products from cities, such as old New York City subway cars, have also been used as a substrate for artificial reef restoration. Why do we use our own trash and byproducts of human life, to rebuild underwater?" 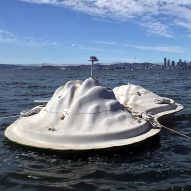 Objects and Ideograms' first Coral Carbonate prototypes were recently installed to the base of Float Lab in the San Francisco Bay in collaboration with California College of the Arts. They are now under close observation and have already seen habitation and growth.

The prototype combines several of the cylindrical objects tied together with rope in a stacked form. This is designed for flexibility and emulates marine biofouling – the accumulation of biological matter on submerged objects like boats that can be very diverse ecosystems.

The shapes and sizes for the Coral Carbonate units are developed through observation of natural coral skeletons combined with digital computation techniques.

Rather than attempting to directly replicate the size and shape coral skeletons, the 3D-printed objects are optimised to create as much surface area for life as possible.

"These are not one-to-one replicas of coral, the goal is not to literally recreate the skeleton of coral, but to learn from and mimic their forms and functions to create broader opportunities for biological growth in various conditions," said Schofield.

"The surface patterns, and spatial forms, are all optimised to create as much surface area as possible which make more real estate an opportunity for coral to settle and propagate with exposure to maximal sunlight." 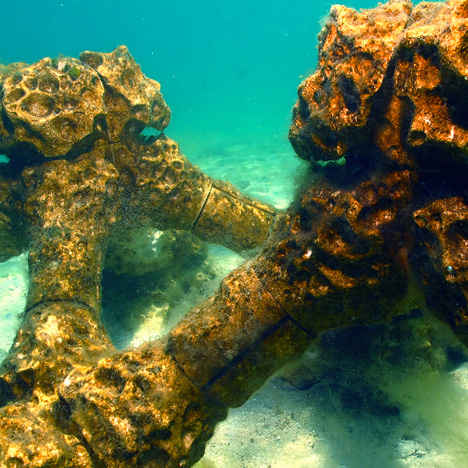 Objects and Ideograms are now exploring how the patterns and forms of these objects can be scaled appropriately for other "clients" – such as fish seeking refuge from predators.

According to Schofield, the fabrication process for each object is highly replicable and the only hurdle for scaling is the size and number of 3D printers available.

"The larger the print bed of the printer, and the more printers accessible, the more can be fabricated and deployed," he said. "Today there are many large format binder jet 3D printers on the market that would help us scale in this way, we are always looking for new partners."

Coral Carbonate is an ongoing project and has so far involved many collaborations with the likes of the Fabien Cousteau Ocean Learning Center, California College of the Arts, and Moss Landing Marine Laboratories Benthic Lab.

Alex Goad is another designer featured on Dezeen that is helping with the restoration of coral reefs. His lego-inspired modular structures are intended to form a base for plant and animal life to return to their reef habitats that have been destroyed by human activity.

Earlier this year, British sculptor Jason deCaires Taylor created an underwater greenhouse off the coast of Australia as a habitat for marine life.