Alma-nac designed the facility for London-based enterprise The Axis, which wants to provide a nationwide network of writing and production spaces for music professionals.

The Axis on Ormside is the organisation's first site and responds to the need for acoustically designed songwriting and production studios with client-facing facilities.

Located on a former industrial estate in South Bermondsey, the brick warehouse was identified as a suitable site due to the area's abundance of creative businesses and the proximity of recording facilities at the nearby Atomic Studios.

Alma-nac made the most of the two-storey building's internal volume by creating a full-height space that exposes the existing roof trusses and allows daylight to flood in through new transparent panels inserted into the roof.

The architects created an internal street that runs along the spine of the building and is flanked on either side by ten soundproofed studios.

"The existing building provided a weatherproof enclosure and the freedom to create a series of carefully controlled local environments, and to position them as if each studio were a house in a street," explained Alma-nac director, Chris Bryant.

"This arrangement allows the occupants to meet and work independently while retaining the expanse of the original structure."

A small reception desk is positioned next to the building's entrance and a staircase leads up from this lobby space to a communal lounge and meeting area that occupies the partial first floor.

The architects claimed that the use of low-cost materials and basic craftsmanship throughout the project was inspired by Italian architect Enzo Mari's 1974 publication titled "Autoprogettazione", which encouraged individuals to make their own furniture using wooden boards and simple tools.

The decoration on the studio walls that face onto the internal street is comprised of plywood panels cut into geometric patterns using a computer-controlled router.

The pattern references the work of kinetic artist Carlos Cruz-Diez, whose Physichromie series from 1959 investigates how colour and pattern change when viewed from different perspectives. It also reduces waste by utilising the whole of each wooden panel.

"We were lucky to work with an ambitious client, and together we pursued a zero-waste strategy, including aligning the size of the studios to standard material dimensions and using every part of the CNC-routed plywood sheets," added Bryant. 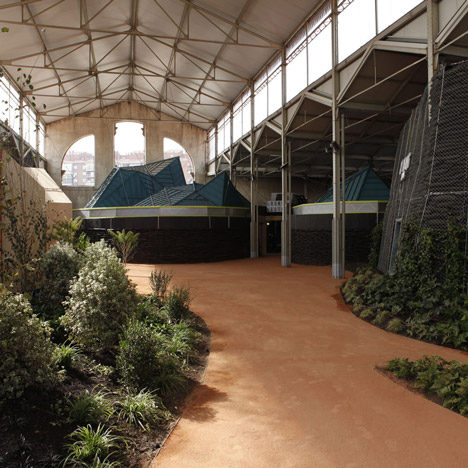 The bright colour scheme and tessellating patterns are influenced by Joana Pereira's branding for The Axis. The electric-orange roof trusses contrast with a dark teal used in the internal street, lobby area and the building's front elevation.

Sound insulation was a key consideration when developing the interior, so specialist firm Gillieron Scott Acoustic Design was brought in to ensure the studios are structurally isolated and use interior finishes chosen to control reverberation.

Alma-nac was co-founded by Chris Bryant, Caspar Rodgers and Tristan Wigfall in 2009. The studio adopts a participatory approach to all its projects, involving clients and other stakeholders to ensure they provide a positive experience for their users.

The studio's previous projects include an emergency hospital for pets featuring colourful details and custom-made furniture. Alma-nac also renovated and extended a house in south London that is wrapped in a second grey-brick skin.