London studio SODA based the bold interiors of The Office Group's Liberty House offices on Regent Street on the colourful prints of the adjacent Liberty London department store.

The studio created the interiors for two separate, flexible workspaces in the same building, called Liberty House and Liberty Rooms.

While the designs vary in the two areas, both were informed by the classic fabric Liberty prints produced by the department store next door.

The larger workspaces of Liberty House features a calmer, more neutral palette of colours and materials than the bold event spaces and meeting rooms in Liberty Rooms.

The department store originally traded out of Liberty House, before moving one door down.

"The relationship with the Liberty’s department store was the starting point for the graphic identity and the interior concept," SODA architect Parvathy Vipulendran told Dezeen.

"The iconic Liberty prints inspired the colour palette of the design, while the mock-Tudor building inspired the high-end retail aesthetic and crafted objects positioned throughout the scheme."

The studio wanted to ensure that the interior had a coherent design language, something it thought especially important for "a building of this grandeur." Liberty House is a Grade II-listed building.

In order to keep the interior design coherent, the studio chose to remove a number of non-load bearing walls to open the space up and create an "appropriate" sense of scale for the rooms, which include meeting rooms, focus booths, breakout spaces, lounges, private offices and a kitchen and dining area.

SODA used a colour palette of neutral warm beiges for the office spaces and bolder colours, such as dark petrol blue hues, bright yellow and warm terracotta, for the more public spaces, the meeting rooms and the bathrooms.

The material use and form language inside the building was also informed by its well-known neighbour as well as by the Liberty House building itself.

"We built a core material palette that was inspired by Liberty House and the Liberty fabrics, which comprised of scalloped panelling, tiling, oak joinery and floors, reeded glass, and more functional materials such as vinyl," Vipulendran said.

"The scalloped surfaces can be seen in the facade of Liberty House, so it was a really nice way to bring the language of the exterior internally and apply it on key joinery elements."

The scalloped design of the house's facade was also referenced on some of the doors inside Liberty House.

"The routing on the upper floor tea points and doors has the same rhythm as the scallop and elevate these doors above a standard office door," Vipulendran said.

"The rhythm of these vertical lines are beautifully complemented by the lines of the curtains through the scheme." 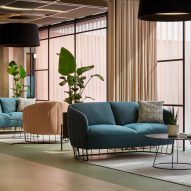 In some of the spaces, including tea points and bathrooms, SODA chose to use Altrock and Durat terrazzo material to create more striking patterned interiors. The studio collaborated with Altrock to create bespoke coloured surfaces that would match the design.

As well as informing the colours and shapes of the office space, the Liberty department store also lent some of its in-store aesthetic to the interior, which features a number of hand-crafted objects throughout as well as pieces that nod to display cases.

"This is expressed most clearly in the main lounge and reception, where we used light, bright tiled surfaces to highlight key joinery objects," Vipulendran said.

"These were inspired by the craftsmanship and the display of high-end items in Liberty. These jewel-box cabinetry pieces are arranged through the reception and lounge to create islands of social activity along the length of this open space."

SODA's branding for the project also plays off Liberty London's typeface, with an abstract pattern derived from the letters "Liberty" used to create prints on both textiles and surfaces inside Liberty House.

While the final design encompasses many different types of rooms, one stands out to Vipulendran.

"The lounge is particularly spectacular as from this space you can really appreciate the richness of Liberty House and its prominent location along Regent Street," the architect said.

"The room comes to life in the afternoon when the sunlight falls through the big period windows and illuminates the variety of surfaces."

SODA recently designed the interiors for a flexible workspace in a gridded 1970s building, while The Office Group (TOG)'s latest London workspace prior to this one was designed by Note Design Studio.