Furniture and interior designer Zeev Aram, who promoted numerous modernist and emerging designers at London's Aram Store, has passed away at the age of 89.

Aram died in his home on 18 March. He was known for creating furniture pieces including the glass Altra Table, famously immortalised in a David Hockney painting, as well as being a patron to many emerging and under-appreciated designers.

Through his self-titled showroom, Aram Store, which opened on the King's Road in the 60s, he introduced great modernists including Marcel Breuer, Le Corbusier and Charlotte Periand to the British public for the first time.

He was also responsible for bringing global attention to the work of architect and designer Eileen Gray after meeting her in her early 90s and securing the rights to her designs.

His annual self-financed graduate show at the Aram Gallery for Experimental and New Design provided a platform for some of London's most promising young design talent including Thomas Heatherwick and Jasper Morrison.

"Zeev was not only a legend to many designers like me but he also became a friend over the years and he'll be very missed," Heatherwick told Dezeen. 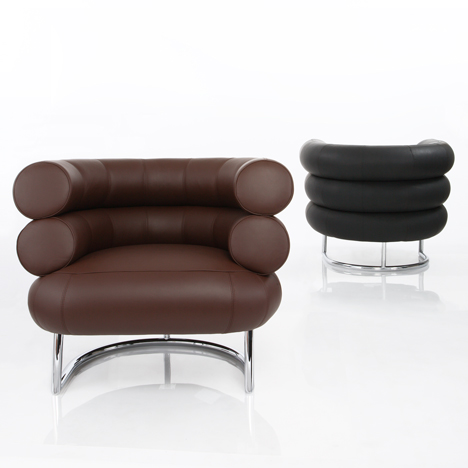 Eileen Gray was "disappointed that she was forgotten" - Zeev Aram

"Apart from being the most wonderfully warm and enthusiastic person, Zeev was a design titan not just for his eye and his vision but for his endurance too," Morrison added.

"His generous spirit was unstoppable and invincible and remains a great example of a life well-lived."

Aram is survived by his wife Elizabeth, his children Daniel, Debby and Karen and ten grandchildren. His daughter Ruth Aram, who previously directed Aram alongside her father and brother, died of a brain tumour in 2017.

Before Aram the UK was a "modern furniture desert"

Aram was born in the Romanian city of Cluj in 1931. As the second world war erupted, the Jewish family fled to Palestine in 1940 to escape the conflict and growing antisemitism.

Aram followed his soon-to-be wife Elizabeth Bunzl to London in 1957, where he studied furniture and interior design at the Central School of Art and Design, now Central Saint Martins. After graduating in 1960, he went on to work for the architecture practices of Ernö Goldfinger, Basil Spence and Andrew Renton.

Within three years he set up his own studio, Zeev Aram & Associates. At the time, Aram remembered, the UK was a "modern furniture desert" save for the odd piece of Eames.

In 1964 Aram set up his Aram Store on the King's Road in Chelsea, presenting work from designers such as Breuer, A&PG Castiglioni and Archizoom to the UK market for the first time.

The road was at the centre of a cultural revolution in the Swinging Sixties, with Mary Quant inventing the mini skirt a couple of blocks over and Terence Conran opening the first Habitat store only a few months later.

Above the shop, Aram retained a small office for his practice, designing interiors for increasingly high-profile clients and furniture pieces such as the Atlantic Desk and Altra Table with its stout, cylindrical legs.

By 1973, the store had outgrown its Chelsea location and moved to larger premises in Covent Garden, where Aram set up his gallery on the third floor.

Here, he staged graduate exhibitions showcasing work from young designers that he had scouted himself.

"With his legendary energy and endurance, he visited every graduate design show in the United Kingdom searching for the best ideas and talents to bring to London and exhibit in his gallery," Heatherwick recalled.

"He wasn't just doing this for himself to find great people to work with but also out of a simple and generous desire to encourage and inspire young designers. When he began there was hardly anyone else doing such a thing. The design culture we live in now of encouraging and supporting young graduates didn't much exist."

Around this time Aram also met Irish modernist Eileen Gray, a contemporary of Breuer and Le Corbusier, who Aram recalled was "disappointed that she was forgotten".

Gray became a close personal friend before her death in 1976 and gave him the exclusive rights to produce and market her furniture designs, among them the seminal steel and glass E1027 side table, Bibendum armchair and Tube Light.

On a mission to once again help her work gain the recognition it deserved, Aram also created a website dedicated to her life's work.

"Now, 30 years have passed: it took Zeev Aram to make it happen – I'm sure that there would have been someone else but there wasn't," Aram said in a 2013 interview with Dezeen.