The accommodation building forms part of the campus of the Chandigarh Group of Colleges, which is situated in the Landran district of Mahali – a satellite town to the west of the city designed by the Swiss architect in the 1950s.

Charged Voids was tasked with delivering an affordable building to accommodate 500 students on the 25-acre campus.

Rather than designing for the proposed greenfield site, the architects suggested slotting an open and accessible triangular structure onto an awkward lot occupied by an existing bus yard.

"The primary idea was to design a hostel building with no boundary walls in a campus divided by gated compounds for all living spaces," said Charged Voids.

"This would also serve the purpose of creation of public spaces and amenities in a campus that has a serious shortage of covered spill-over spaces."

The building has a variety of public spaces on its lower levels, including a double-height covered plaza connected to a triple-height sunken courtyard.

From the adjacent road, steps lead up to an open-air communal space, which can be used by the entire campus. Also at this level is a large reception area, with an adjoining dining and kitchen facility.

A gap between angled walls marks the entrance to the basement courtyard, which is open to the campus during the day but only accessible by the building's occupants at night.

The basement houses a gym looking out onto the sunken courtyard, with TV rooms, a sports area, a multipurpose hall and storage also accommodated on this level.

The walls around the public spaces on the lower floors are painted in primary hues that help to distinguish their different functions.

These colours, as well as the creation of a sheltered outdoor space punctuated by supporting columns, or piloti, recall the work of Le Corbusier, who used piloti to free up circulation spaces in projects such as the Unité d'Habitation in Marseilles and Villa Savoye in Poissy. 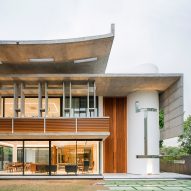 The accommodation building features a simple, triangular plan with rooms arranged around a central atrium topped with skylights that allow natural light to penetrate down through this circulation space.

A reading room, administration office and warden's living space are accommodated on the building's second floor, with student housing occupying the third to the ninth levels.

The project focused on creating quality social spaces, so the atrium is crisscrossed by bridges at each level that function as additional places for students to congregate.

"These varied bridges create a great interaction between the various levels and also provide for a naturally well-lit and ventilated interior space," the architecture studio added.

The project features a limited palette of low-cost materials including floors made from local kota stone, white-painted surfaces and a rough grey render used for the walls.

The simple materials and finishes in varying shades of white and grey give the building a neutral, monochrome aesthetic that is enlivened by the bright pops of primary colour applied to the external walls and internal doors.

Charged Voids previously referenced the modernist principles of Le Corbusier in its design for a family home featuring a curved roof and a white turret punctured by geometric apertures.

The studio has also completed a house in Chandigarh featuring geometric, stone-clad surfaces that separate a series of living spaces arranged around a central courtyard.

Photography is by Javier Callejas Sevilla.