Parisian studio RDAI has designed a store on Tokyo's prestigious Omotesando street for fashion house Hermès, which was designed to evoke aspects of Japanese nature and culture.

The 488-square-metre store is the first freestanding Hermès outlet in Tokyo since the brand opened its Ginza emporium in 2001, which was also designed by RDAI.

The latest store occupies a prime spot on Omotesando – one of Tokyo's most luxurious shopping destinations.

The street is lined with high-end boutiques including a Jil Sander store with an interior designed by John Pawson, and an OMA-designed store for Coach featuring herringbone-patterned glass facades.

The Hermès store occupies two storeys of the Jingumae Ota Building, which has a stone plinth that prevented the store from having a fully glazed facade.

As the store could have traditional window displays RDAI chose to wrap the building's base in a geometric screen made from pieces of copper-coloured stainless steel.

Small window displays are incorporated into the patterned cladding, along with lighting that illuminates the stonework at night.

According to Hermès, the grid gives the facade a modern look that "adds depth and light to the exterior, just as light and shadows intermingle in a bamboo grove."

An entrance set back from the street leads into the store, which contains numerous references to Japanese nature and culture.

Floors throughout the retail space are made from green stone in two shades, which is laid in a pattern resembling Japanese tatami mats. 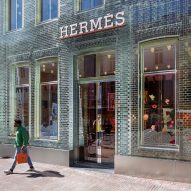 A dramatic staircase provides one of the boutique's most striking architectural features and also allows light to penetrate between the two levels.

On the way up the stairs, customers will encounter a suspended bamboo sculpture by Japanese artist Shoryu Honda that is inspired by the shapes of clouds and the infinite surface of a Moebius strip.

The second floor features mobile partitions that recall the traditional paper screens used in Japanese architecture to separate spaces whilst maintaining a sense of transparency.

RDAI was founded in 1972 by interior designer Rena Dumas and is in charge of Hermès' global retail design. The studio is now under the direction of Denis Montel.

Its previous projects for the brand include a Paris boutique featuring pavilions made from strips of ash wood and the interior of an Amsterdam store designed by MVRDV.