A 1960s hall with a barrel-vaulted concrete ceiling gave MoDus Architects the design cues for this refurbishment of an education centre in South Tyrol.

The locally based studio has renovated and extended Cusanus Academy, a learning and conference facility in Bressanone that aims to bring together religious and secular ideologies.

The project involved reorganising spaces inside all three of the academy's buildings: ​Paul Norz Haus, ​Mühlhaus and Haupthaus.

The largest of these is the Haupthaus, or Main Building, which was designed by local architect Othmar Barth and inaugurated in 1962. Although it was initially controversial, due to its position beside an 18th-century seminary, this brick and concrete building is now considered to be Barth's masterpiece.

The most impressive space within the Haupthaus is the double-height hall, with its vaulted concrete ceiling structure. MoDus founders Matteo Scagnol and Sandy Attia decided to use this space as the starting point for their renovation design.

"​This building has been our master," said Scagnol, "a treasure trove of sage architectural solutions, of refined details and measured geometric patterns​; a muse in the skilful orchestration of natural light and in the use of few materials; a guide to concision, simplicity and propriety."

MoDus – whose other recent projects include Bressanone's main tourist information office – was tasked with expanding the existing facilities and improving accessibility within the buildings.

The two most visible interventions are a new conference hall in the basement and a newly formed axis that cuts across the ground floor.

A U-shaped skylight allows light to indirectly penetrate the edges of the room, while flexible partitions allow the space to be divided into two when required.

The new axis connects the main entrance lobby with the dining hall, eliminating a dead-end corridor and creating space for a new coffee shop. It is interspersed with seating areas, creating a space that will be full of activity.

"The generous hallway embodies the ambition of the project to foster a more welcoming environment without stepping outside of the constructive logic of the building​," reads MoDus' project text. 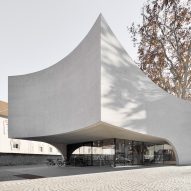 Other significant changes include a new staircase connecting the Haupthaus and its extension to Paul Norz Haus, and the conversion of former clubhouse spaces in the basement into seminar rooms.

The refurbishment of existing spaces was informed by thorough research of archive drawings. Scagnol and Attia discovered that Barth had drawn up multiple variations of the plans, which helped them understand how to make adaptations without straying from the original concept.

The same logic extended to the interior furnishings. They chose to refurbish the original Finn Juhl armchairs and reintroduce them in common spaces throughout the building.

The project also involved refreshing the 55 bedroom suites, which occupy the upper floors of all three buildings.

The Haupthaus bedrooms are designed to celebrate Othmar Barth’s original furnishings, while blue tones were added to the Paul Norz Haus rooms, and the Mühlhaus rooms feature shades of green.

South Tyrol-based MoDus Architects was founded by Attia and Scagnol in 2000. Previously the studio designed three undulating concrete tunnel entrances and a set of sculptural chimneys for a road system in the region.