Photographers Robert Rieger and Felix Brüggemann have released a book that pays homage to the recently closed Tegel airport and captures its distinctive hexagonal terminal that once served as a bastion of freedom for walled-in West Berlin.

Called Flughafen Tegel, the book contains a series of photographs captured during the coronavirus lockdown in 2020 before the airport closed in late October, alongside some shots taken when it opened in the 1970s.

Separated from Soviet-controlled East Germany by the Berlin Wall, a generation of West Berliners saw the hexagonal terminal at Tegel, which opened in 1974, as a lifeline that connected them to the outside world.

With their book, Rieger and Brüggemann hope to capture the deep, emotional attachment that many Berlin residents still have to Tegel by including colour slides that were taken by Brüggemann's grandfather shortly after the terminal opened.

"We found these pictures in his estate, and they speak of the pride the people of the walled-in city felt when Tegel was opened in the early seventies," Brüggemann told Dezeen.

"Neither West nor East Berlin exists anymore but as painful as the divided city must have been, it also provided people with a sense of identity, therefore closing Tegel feels like another loss to many."

"Nearly everyone has their 'special relationship' to Tegel," Rieger added. "I love talking to cab drivers about the airport – they really miss it the most, I guess because it was easy to reach."

The brutalist Tegel airport was on the brink of closure since 2011 while the city waited for the arrival of the new Berlin Brandenburg Airport (BER), which was plagued by a series of successive delays.

But it wasn't 30 October 2020, when the new airport finally opened nine years behind schedule and €4bn over budget, that Tegel ultimately closed its doors.

"As fascinating as Tegel was as an idea of an airport, it could not keep up with the dynamics of a reunited Berlin, it simply was too small and the concept of a drive-in airport was not scalable to the needs of Germany's new capital in the centre of a reunited Europe," said Brüggemann.

"Also, being placed fairly close to the city entre meant that almost a third of the city's residents got more or less affected by the noise and pollution."

Located only 25 minutes away from the centre of Berlin, Tegel is often called "the airport of short distances" as its hexagonal terminal allowed travellers to drive straight up to their gate via the central open courtyard.

Each of the 15 original gates is only a 28 metre walk away from the street and comes complete with its own self-contained check-in and security area as well as a luggage belt for arrivals.

"The idea to drive with your car directly to your gate, without having to walk miles through duty-free shopping malls, seems both very intriguing and anachronistic today," Brüggemann added.

"Nowadays, neither the paranoid security requirements of air travel nor the constant congestion of urban traffic allows for such a casual and comfortable way of switching between the two."

The building was designed by Meinhard von Gerkan, whose practice GMP Architekten would go on to complete seminal architecture projects in the German capital including the new airport, Berlin central station and the renovation of the Olympic stadium.

Tegel was built almost entirely in concrete and metal, with its distinctive cantilevered staircases and rounded, 1970s-style glazing standing in stark contrast to the high-tech architecture of many modern airports.

"Felix's son Igor says the airport reminds him of Star Wars and that was the moment when it clicked and we decided to start shooting there," said Rieger.

"I totally agree with him – especially the windows of the entrance look like they are part of a spaceship."

Tegel, which was given landmark status in 2019, is now set to be converted by GMP Architekten into an industrial and research park for urban technologies called Urban Tech Republic. 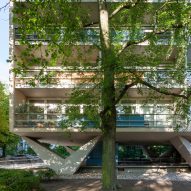 Although Rieger is glad that Tegel's original architecture will be preserved, Brüggemann is more sceptical.

"I find the name Urban Tech Republic very unfortunate," he said. "What is this even supposed to mean?"

But he does believe that Tegel's closure is ultimately for the best.

"I recently flew from BER for the first time and I felt nothing," Brüggemann explained.

"But that's not a bad thing. Tegel was charming but also quite dysfunctional at the end. An airport that just works – surely that's something Berlin could use by now."

Elsewhere in the city, Pedro Vannucchi recently photographed an experimental social housing block designed by Oscar Niemeyer in the 1950s, which sits on chunky V-shaped pillars.

A number of Berlin's other deserted buildings are chronicled as part of a series by German photographer Christian Richter, which saw him break into more than 1,000 abandoned sites across Europe.