Canadian studio Batay-Csorba Architects has carved a barrel-vaulted tunnel through a brick home in Toronto designed to evoke the architecture of ancient Rome.

Named High Park Residence, the new-build home has two storeys and a basement and was designed for homeowners with Italian heritage.

The ground and first floors exist within a barrel-vaulted archway that tunnels through the length of the property.

"The vault, in its many permutations, is one of the most common archetypes of ancient Roman architecture, characterised by its powerful modulation of light and its sense of lightness," said studio co-founder Andrew Batay-Csorba.

"Its geometry informs a relationship between the house's facade and its interior."

The front of the house is defined by a arched carport formed by a curved cutaway from the monolithic brick facade. This element takes cues from porticos, the covered porches leading to the entrances of buildings often found in Roman architecture.

A pattern of bricks protruding from the side of the facade casts patterns of light and shade cast and creates small shelves for snow to fall on and settle in winter.

"The tradition of brick in Toronto's residential fabric dates back to the 19th century when Toronto's stock of Victorian houses was built," said Batay-Csorba. 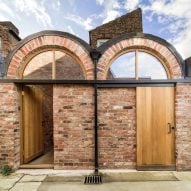 "In these Victorian houses, ornamental detail normally presents itself in single isolated moments of brick coursing located above apertures, along corners and at cornices. We took this singular moment of ornamentation and blew it up."

In order to bring light to the narrow building, the walls and vaulted ceiling are painted white throughout the home.

A series of open living spaces housed within the vaulted structure form the ground floor. The vault also shapes the floor above, where the rooms are sliced into closed spaces and connected by bridges.

Downstairs, a double-height entrance features a blocky glass skylight that extends from the front-facing facade and connects the lower and upper levels.

The ground floor comprises a powder room, dining and living rooms, and a double-height kitchen topped by another skylight.

"The vault is punctured, cut and peeled into new geometries that help to distribute light and air in key locations," said Batay-Csorba.

On the first floor, the main suite includes a bedroom and open bathroom which are next to another bathroom and two bedrooms, as well as a laundry room.

Interspersed at various intervals are more skylights that flood the otherwise cave-like house with light. In addition to those above the entrance and kitchen, skylights are placed atop the main suite's shower, and the other bathroom too.

Batay-Csorba Architects is an architecture and interior design studio co-founded by partners Jodi and Andrew Batay-Csorba in 2012.

The firm renovated another Toronto home with a facade formed from a patchwork of wood shingles and stones. More recent projects include a greyscale concrete bar that snakes through an oyster restaurant in Vancouver.