Described by BIG as being infinity-loop shaped, the skyscraper was designed to "connect ground to sky in a continuous loop of collaboration".

According to the studio, the building's form aligns with the design aims of OPPO, which is China's largest smartphone manufacturer.

"Technology at its best should be a seamless extension of life," said BIG partner Brian Yang.

"The new OPPO R&D headquarters embodies this notion, sitting with ease in the scenic wetlands of Hangzhou while negotiating between the dense urban fabric on one side and the natural landscape on the other," he continued.

"It will be an architectural manifestation of an OPPO product: effortlessly elegant while elevating the quality of human life in the city."

Named O-Tower, the circular skyscraper will surround an open courtyard. It will be built within Hangzhou's Future Sci-Tech City and act as an "iconic landmark and gateway" to the business district.

The tower will be built alongside a natural lake and a 10,000 square-meter park.

Along with being designed to be a landmark, the building's form is meant to provide a variety of different floorplate sizes and increase the amount of natural light entering the offices. 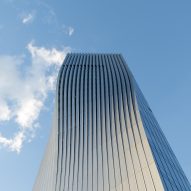 "We have attempted to imagine the future work environment of OPPO to be sustainable on a triple bottom line: economically, ecologically and socially," said BIG founder Bjarke Ingels.

"The compact form folding in on itself provides large flexible floorplates with the daylight access and fresh air of a slender tower."

The ground floor of the skyscraper will contain a public space that connects to the publicly accessible central courtyard.

"The central oasis and the surrounding wetland park expands the public realm into the heart of the complex," explained Ingels.

"Each element is intrinsically intertwined forming the melted loop that is perceivable at all scales – from the urban landmark to the human experience — becoming a manifestation of the design simplicity that is an intrinsic part of OPPO's brand."

The building's lower floors will contain exhibition spaces, conference areas and a canteen, while the office floors above will be joined with a series of triple-height spaces under the sloping facade of the O-Tower's roof.

It will be wrapped in an adaptive facade with louvres that will be oriented dependent on the sun's position to minimise solar gain.

Danish architecture studio BIG, which stands for Bjarke Ingels Group, was established by Ingels in 2005 and is now one of the world's leading studios.

Its first project in China was the Danish Pavilion at the Shanghai Expo in 2010. The studio recently completed a pair of towers with rippling and folded facades in Shenzhen and is currently designing an artificial intelligence-run city campus in Chongqing.