Japanese architecture studio SANAA has revealed its design for a museum in Shenzhen, which will be enclosed by a collection of hemispherical forms blanketed by a mesh louvred roof.

Dubbed Clouds on the Sea by SANAA, the 100,000-square-metre Shenzhen Maritime Museum will have a long horizontal, cloud-like structure that was designed to appear as if it was rolling off the South China Sea.

"Shenzhen Maritime Museum is a continuation of its natural environment between the mountain of Dapeng Peninsula and the sea of Longqi Bay," SANAA told Dezeen.

"Shenzhen Maritime Museum is a horizontal landmark imagined as clouds emerging from the sea, like a museum born out of the ocean."

SANAA designed the building to become a landmark on Longqi Bay. It will take shape as a collection of low-lying lattice domes covered in a stainless-steel louvred mesh. 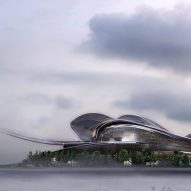 "Above these spheres lies a light floating stainless metal louvres mesh that shades visitors from the subtropical hot sunlight and provides a unified appearance with the landscape."

"Ultimately, the white cloud floats above the sea and changes its appearance at different weather and time."

The Maritime Museum will be organised into three exhibition areas positioned around a large lobby and several courtyards.

Its ground floor will be arranged as a continuous open-plan space without columns that will allow visitors to freely roam.

The building will connect with surrounding green spaces and a nearby wetland park to expand the museum's activity area toward the natural landscape.

"The low-lying large organic building is based on an ocean-museum-park integration concept and is both a continuation of the unique marine landscape and a celebration of marine culture open towards the city," said SANAA. 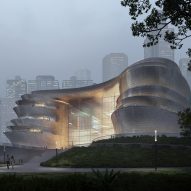 SANAA's design was selected as the winning proposal to an international competition arranged as part of the Shenzhen New Ten – a city-wide development plan that will see 10 new cultural buildings constructed.

Other projects being developed as part of master plan include the Shenzhen Opera House designed by Jean Nouvel and a pebble-shaped science museum designed by Zaha Hadid Architects.

All images are by SANAA.