London architecture studio Daab Design has turned a former art storage vault in Marylebone, London, into a two-bedroom apartment full of Georgian period features that were restored with the help of an archaeologist.

Before the renovation began, the Grade II-listed basement flat was boarded up for decades and featured a dark, cramped interior.

The studio stripped back more recent additions such as vinyl flooring, peeling paint and roofing over the two courtyards to reveal the building's original features and generous proportions.

"Much of the flat was boarded up in an effort to protect the strong room, which had been used as a vault by an art dealer," said Daab Design co-founder Anais Blehaut.

"The benefit of this was that the partitions and vinyl were installed straight on top of original features and actually covered and preserved them over time. So what we thought was lost at first glance was waiting to be found."

The studio rearranged the floor plan to create a clean, simple and functional layout adapted for modern living.

From the street, stairs lead down to a recovered Georgian stone courtyard that serves as the entry to the apartment while another spacious courtyard bookends the property at the back.

Two bedrooms are located at the front near the entrance while a bathroom and open plan living space and kitchen occupy the rear.

The kitchen nook is painted in muted blue and stands in what remains of the art dealer's concrete strong room.

"It took contractors 10 days to demolish a portion of the vault's 500-millimetre-thick concrete walls and six people to move the heavy steel door across the courtyard to its new home as the door of the wine cellar," Daab Design recalled.

This is located in a generous guest studio beyond the rear courtyard, which also features a bathroom, utility room and play area, all painted in olive green. 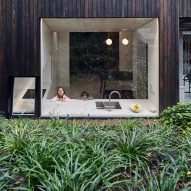 The firm enlisted an archaeologist and a team of structural engineers to go through an "almost surgical" process of recording, identifying and protecting the apartment's heritage features, including windows, wooden doors, architraves, York stone flooring and an original outdoor larder.

"Upgrading the floors, repairing the walls and installing new services was a complex and intricate effort in conserving the period detailing," said the studio.

Daab Design chose to finish the walls in various shades of green and white to offset the original York stone flooring that is revealed in sections throughout the space.

Green was also used on contemporary additions such as velvet curtains and glazed terracotta bathroom tiles to create the impression of a leafy garden reflecting green-tinged light into the flat.

Blehaut, who founded the studio in 2014 alongside Dennis Austin, explained that the studio wanted to seamlessly blend the flat's restored historical features with contemporary interventions and modern technology.

These include "invisible" retrofitted services like underfloor heating, LED cove lighting, USB sockets in recessed floor boxes and flush walk-in showers that help to "reveal the simplicity of the space".

Elsewhere in London, Holland Harvey has revamped a row of heritage-listed Georgian townhouses to create a hotel with relaxed, Scandi-inspired interiors.