A new guesthouse and swimming pool are among the updates to a 56-year-old home on Fire Island that has been overhauled by American studio Andrew Franz Architect.

Called Fire Island House, the residence is tucked into a wooded site near the beach. The home takes its name from its location – Fire Island, a barrier island in the Atlantic Ocean that is a popular getaway spot for New Yorkers.

The project entailed the renovation and expansion of a two-storey, cedar-clad house that was designed by Florida-born architect Horace Gifford, who created dozens of beach cottages on the island. The house dates to 1965.

Fire Island House involved several modifications, including a new guest house and a new swimming pool and terrace. The team also updated the original home and made various adjustments.

The goal was to create additions that were distinguishable from the original design, while also being respectful. 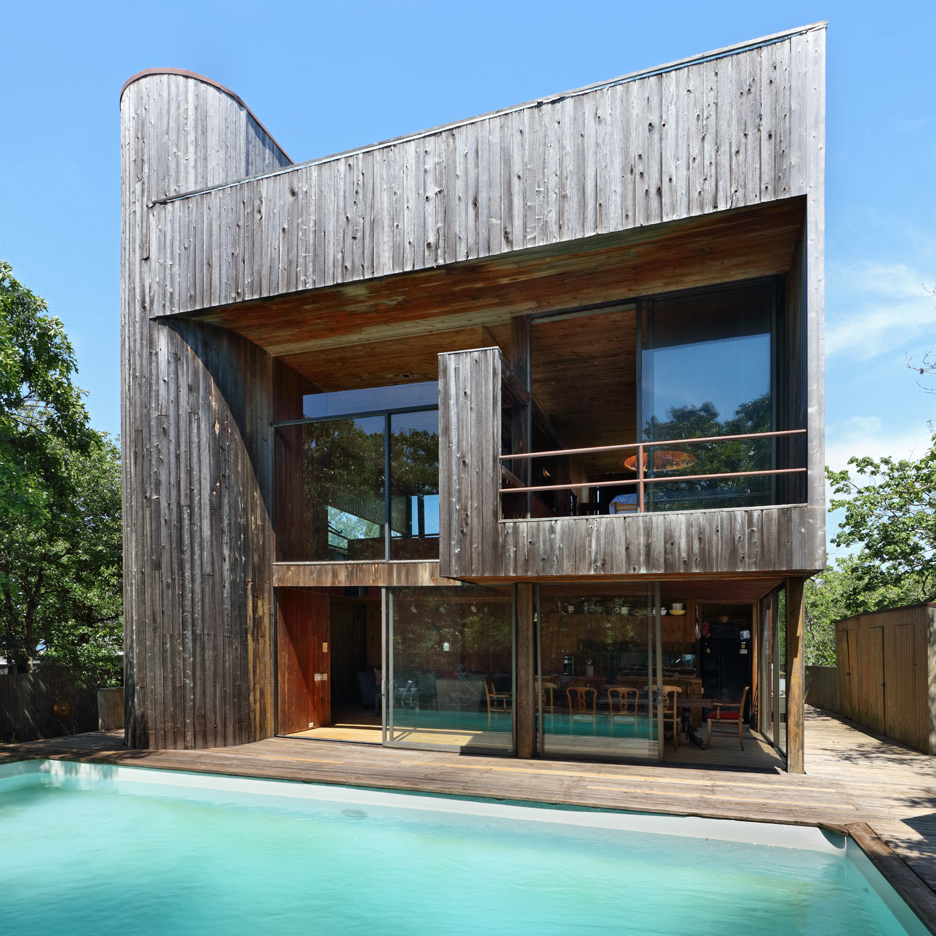 "I think we all fell in love with this house, and therefore only wanted what was best for her," said architect Andrew Franz.

"The project came to be so much more about protecting this iconographic modernist building, not our egos."

In the new guesthouse are a bedroom and bathroom. The building's rectangular shape refers to the original home's geometry, as does its cedar siding and jalousie windows.

It was positioned to form an internal courtyard, which serves as a transition between the old and new, according to the team.

The main home's exterior was fully restored, including the installation of new cladding, copper flashing and roofing.

On one side, the team added a staircase that is cantilevered off a shear wall and connects the ground level with upper-level terraces.

Inside, the designers restored wood surfaces and windows and implemented a new heating and cooling system. Small changes were made to other parts of the interior.

"Minor plan gestures were incorporated to improve circulation and function — such as enlarged bathrooms, a restored kitchen, and a vintage fireplace," the team said.

The team also addressed the landscape, making sure to preserve its wild character. Scrub was cleared away and native vegetation was reintroduced, with the aim to support local fauna and foster pollination.

The property is located in Fire Island Pines, one of several communities on the barrier island. Since the mid-20th century, the car-free area has been a haven for New York's gay community, particularly in the summer.

There are a number of restored, modernist homes there, including a single-storey dwelling that received an update by Rodman Paul Architects, and a multi-level home that was revamped by Delson or Sherman Architects so it could endure hurricanes.

Photography is by Albert Vecerka/Esto and Tria Giovan.