The Italian government has approved plans designed by architecture studio Labics and Fabio Fumagalli with engineering firm Milan Ingegneria to create a remote-controlled, retractable floor within the Colosseum arena in Rome.

The retractable floor will replace the arena's original floor, which was removed in the 19th century to restore the vision of "ancient times".

"Realisation of the arena resumes the thread of time, finally restoring to the public the same vision that was had in ancient times from the stage of the monument, restoring its integral reading, highlighting the needs of protection and conservation with the use of highly technological structural construction choices aimed at long-term eco-sustainability," said Alfonsina Russo, director of the Colosseum Archaeological Park.

Labics, Fumagalli and Milan Ingegneria's design will cover the arena's entire floor and would allow visitors to stand in the centre of the arena and performances to be held within the Colosseum. It will be installed by 2023.

The arena's floor will be supported on the building's existing structure and will be retractable so that the elaborate hypogeum – the complex of lifts to bring animals and gladiators directly into the arena beneath the stage – can be viewed.

"With its various configurations, created by opening and moving the slats, the new floor will gradually reveal the underground structures to the visitors demonstrating their detailed structure," said the Colosseum Archaeological Park.

"In this way, it will be possible to understand the complex functional nature of the underground areas and their interaction with what used to happen above." 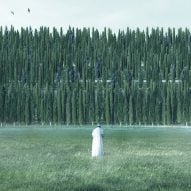 The stage will be made from a series of carbon-fibre slats finished in Accoya wood. These will be supported on tracks that are curved around the arena edges and straight across its middle.

To retract the floor, these slats will be rotated 90 degrees and then withdrawn.

"The slats will be moved without interrupting the visit or hiding any part of the archaeological structures," explained the Colosseum Archaeological Park.

"The activation of such mechanism during the visit to the underground areas will ensure new and outstanding views, as well as amplify the effect of natural light and the magnificence of the Colosseum."

To protect the hypogeum below the stage, 24 mechanical ventilation units will be installed to control the temperature and humidity.

Incorporated within the floor will be a rainwater collection system that will recover water to be used in the tourist attraction's toilets.

Attracting around seven million tourists annually, the Colosseum is one of the most visited attractions in Italy. It was completed in 80AD and was the largest amphitheatre in ancient Rome holding between 50,000 to 80,000 people.