As part of Valencia's programme as World Design Capital 2022, local firm Clap Studio has created a modular installation for a television studio that was informed by the ocean and made from gridded mesh boxes and illuminated spheres.

The installation, titled The Sea, is located in the David Chipperfield-designed Veles e Vents building and will be used as a meeting point and television studio for filming content around different World Design Capital events.

The David Chipperfield-designed building that the installation sits in informed its design from the beginning.

"The building 'Veles e Vents' is located in 'La Marina de Valencia', the historic dock of the city. It is physically and visually connected to the sea. We thought about the user's experience, the journey they make to get to the space."

Informed by the shape of waves and the nearby Mediterranean Sea, the installation took shape as a collection of gridded modular mesh boxes.

Clap Studio used three modular boxes in varying sizes to stack and build volumes that could be used as audience seating for the space to fulfil its function as a television studio.

The firm explained that through layering and stacking the modules, it was able to achieve a layered opacity that created a range of depths and opacities.

Illuminated spheres were placed within and around the gridded volumes, further adding depth to the hyper-functional structure.

"To conceptualise the sea we thought of an electro-welded mesh with which, by superimposing one mesh on another, we managed to generate different opacities and depths, as it happens with seawater," said Montagud.

"We created a light installation that accompanies The Sea and provides a magical atmosphere. With these illuminated spheres we conceptualised the jellyfish floating in the interior of the sea."

The modular mesh boxes were fitted with recycled foam that create comfortable seats, but also aids the acoustics of the space.

On stage, the seating took a more traditional form. Here, the gridded mesh volumes were used to create forms that reflect the traditional silhouette of a chair and were similarly fitted with a foam seat and backrest for comfort. 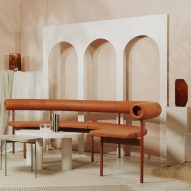 The studio explained it wanted to create a space that was both versatile and hyper-functional.

Its lightweight material palette means The Sea can be easily disassembled, assembled, transported and reconfigured into an endless number of solutions.

"We imagine the space changing its shape and configuration, adapting in form to its function," said Montagud.

"We understood that it had to be a space with a life of its own that would grow with World  Design Capital Vienna throughout 2021 and 2022. That is why versatility was one of the most important points of the project. "

The studio explained that it hopes to see the installation live past the interiors of the Chipperfield building, stating that it could be used within any context.

"When we designed the installation we were very conscious of the World Design Capital's idea of changing space, so we would like to see all or part of the installation in another context, surrounded by another landscape," Montagud said.

"We imagined seeing The Sea in the middle of the city, surrounded by buildings and living perfectly in a more urban space."

Clap Studio is a creative studio that works across the creation of experiences through interior design, products and installations.