Spanish firm Luis Vidal + Architects has revitalised a 19th-century heritage building in Chile that was abandoned after an earthquake, and added an extension wrapped in glass and timber slats.

The Matta Sur Complex is located on Chiloé Street, a major thoroughfare in Santiago. The complex is set on a rectangular plot owned by the city.

Designed by Madrid-based Luis Vidal + Architects, the project entailed the restoration of an abandoned, 130-year-old structure and the construction of a new, adjoining building to house a Centro de Salud Familiar (CESFAM), or family healthcare centre. The architects also created a central plaza.

The team's goal was to honour the historic architecture while introducing a contemporary aesthetic.

"Our interventions aim to translate the most singular elements of the preexisting building, but using a contemporary, austere language that does not compete with the historic building style but enhances it," the team said.

The heritage building – formerly known as the Metropolitan Lyceum of Santiago – is L-shaped in plan and stretches along two street fronts, forming a closed corner.

It was built in 1891 to serve as a public educational facility. It long housed a primary school for girls, and in 1989, it became an adult training centre.

During an 8.8-magnitude earthquake in 2010, the three-storey building suffered major damage.

"Cracks all over the structure and damages to internal walls, beams and the roof structure forced authorities to declare it uninhabitable," the team said.

"Once abandoned, the robberies, vandalism and the lack of maintenance turned the building into a shell of what it once was."

The city decided to restore it, while also committing to building a new facility to house a public health clinic on the same site.

After a thorough and careful analysis, Luis Vidal + Architects proposed an extensive renovation plan for the 3,000-square-metre school building. 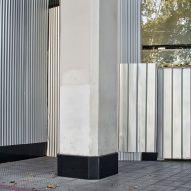 Steps included the replacement of all damaged structural elements, the installation of a new red metal roof, and the implementation of a heating and cooling system.

The team also cleaned and painted the concrete facades, replaced floor tiles, and installed new wooden balustrades, among many other tasks.

"These interventions use a contemporary, austere language that doesn't compete with the historic building style but rather enhances it," the team said.

The team took great care to preserve distinctive features of the building, such as the open-air corridors that run along the interior elevation overlooking the courtyard.

The building, which now serves as a community centre, holds a range of spaces, including an auditorium, a gymnasium, a nursery, and kitchens for hosting cooking workshops.

For the medical clinic, the team designed a new, four-storey structure. Also L-shaped in plan, it occupies the opposite corner of the site and totals 2,500 square metres.

The building houses areas for clinical care, technical support, general services and administrative support. Each floor has a designated colour.

Two different treatments were used for the facades. On the street-facing side, the team mimicked the historic building by using concrete.

On the elevation facing the interior courtyard, a glazed curtain wall is lined with slender timber slats.

"The new facade design follows the criteria established by the existing facades, but it re-interprets the language from an architectural composition and technological point of view," the architects said.

In certain stairwells and consultation rooms, the architects incorporated patios to bring in natural light. On the rooftop, sedum-filled planters help reduce heat.

Situated between the two buildings is the large, multi-level plaza. Among its features are concrete benches, bike racks and flowering bushes.

"This space provides the community with an open space to promote social encounters, thus becoming the heart of the project," the team said.

Founded in 2004, Luis Vidal + Architects is based in Madrid and has offices in London, Miami, Santiago, and Santo Domingo.

Other projects by the firm include the refurbishment and expansion of Can Misses Hospital in Ibiza – a project that included new patient wings and medical facilities, clearer circulation routes, and the addition of photoluminescent paint to the facades.

Photography is by Aryeh Kornfeld and Luis Vidal + Architects.