Design studio Forest and Whale has created Reuse, a container for takeaways made from packaging that can be eaten or composted once the food is finished.

The Singapore-based studio, founded by Gustavo Maggio and Wendy Chua, created the vessel in an attempt to help cut down on the usage of single-use plastic.

The studio's Reuse container is made from wheat husks.

"The wheat husk is ground into smaller pellets and then, with the addition of a small amount of natural binder and water, pressed within two metal moulds at high temperature," Maggio told Dezeen.

"This gives shape to the final container, which is then ready to use."

The resulting container can be used to hold any food but is most suitable for salad, as it can't withstand moisture for too long.

"It can hold a salad with dressing for a couple of hours, but it will slowly start softening and losing rigidity," Maggio said. "The ideal use is for takeaways, where you eat within two to three hours."

The Reuse container is meant to be used only once and can be eaten after it's been emptied, though Maggio says it's not the tastiest.

"The closest reference I can think of in terms of taste is bran sticks, but it is not particularly tasty to be honest," he said. 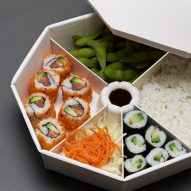 The bowl was designed with four small precut lines that enable the user to tear off pieces of the container to use as a tool to eat with.

"The design of this salad bowl came from observing and analysing eating rituals and trying to find the ideal use for this material," Maggio said.

"In many cultures, salads are accompanied by a slice of bread or breadstick that acts as a tool to help eating and also gives a contrasting texture to the salad ingredient."

If the user doesn't choose to eat the container, it can be placed in a regular composting bin where it will decompose in about 30 days.

The lid for the container is made from polyhydroxyalkanoates (PHA), a bacteria-based composite with properties similar to plastic.

This is not edible, but it can also be composted in regular compost bins, where it will decompose in less than six weeks. It will fully biodegrade in nature and if it were to go into the ocean, it would decompose within three months without leaving microplastic behind, the studio said.

Forest and Whale is currently prototyping the Reuse container and hopes to bring it to the market this year.

Images courtesy of Forest and Whale.